Evolution Gaming is the world’s largest supplier of live dealer streams to online casinos. Many would also say they do it best as well since that’s all they do. Over 4,000 people work for the Swedish domiciled company [Stockholm Nasdaq (EVO:SS)] with most of those employed in Malta and Latvia. Nearly 150 operators carry their games or broadcast them from their land-based casino floors.

Canadian players access the human dealer hosted games from the Live lobby of their favorite casino, make their betting decisions on a smartphone, laptop, or desktop device, and watch the games play out over a high definition live video link. Dealers talk to the players and players can also communicate over text chat.

We’ve selected the best Canadian online casinos carrying their games, as listed below. However, all of their games are run from the company’s studios and control areas on casino floors and are tested/certified by Gamblinglabs-NMI and Bureau Veritas. The company was one of the First to earn the eCOGRA live seal. They are licensed in Malta, Alderney, and the United Kingdom.

Evolution Gaming was founded in 2006 and signed their first agreements with major operators the next year. By 2009, demand was rising so quickly that they had to quadruple the size of the Riga studios and open VIP rooms to handle the whales.

In the next couple of years, they began branding environments and creating dedicated tables for online casinos like 888.com and expanded the Latvia studios again. They moved the facilities the next year and became the first provider approved by AAMS and launched in the highly regulated Italian market.

The year, 2012, saw them launch mobile games ahead of the pack, add Casino Hold’em, and acquire a license from the Malta Gaming Authority (MGA).

Year on year the company grew while adding new games, winning awards, approvals in New Jersey, opening new studios (there are now 10 with one in Canada), reached the 100 table milestone, listed on Nasdaq Stockholm, launched live games from Casino de Spa in Belgium and Dragonara in Malta, and acquired rising competitor Ezugi.

In 2018 Evolution launched its 8th live studio in Westminster to serve provincial lotteries as well as American studios while clocking in their ninth successive yearly win of the coveted EGR B2B Awards winning Live Casino Supplier of the Year. 2019 stacks up as another year of greater recognition with players and another year of winning prestigious awards.

While the menu at the official website lists dozens of games, most of them are simply variants of standard and casino games with a few novelties thrown in for fun. The core offering is blackjack, roulette, baccarat, and poker. Sic Bo is available at some gaming sites and most carry the money wheel games Dream Catcher and Monopoly Live.

All games are delivered in high definition and nearly all have multiple camera angles, some as many 20. Players have broad control of the user experience through the interface on mobile or desktop devices.

There are basically two types of games not counting the environment or names. You’ll find the live games numbered or lettered alphabetically and the rules are very similar. 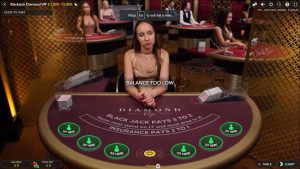 Infinite Blackjack is more interesting to casinos than to players as it allows a virtually unlimited number of players to bet at the same time. However, it also has some friendly rules such as “six-card-Charlie”.

All tables are deck from an 8 deck shoe and blackjack pays 3:2. Side bets are available to any one of the seven people seated, and betting behind is available on all. Side bets include 21+3 and perfect pairs.

Table limits vary widely. Choose Salon Prive or VIP for high stakes games with minimums as low as $1,500 and upper limits of as much as $50,000. You can also play high limit games with others at the table at LeoVegas by choosing the Chambre Séparée.

While you can chat and even politely flirt with the dealers at any table, Blackjack Party is a very social game with lots of entertaining dealer talk and a fun atmosphere. Hardcore strategists may not be fond of the offering, but those who enjoy whacky hosts, fun music, and a colorful environment can get in on the game with low bets. You can bet behind on any hand but will need to find a seat at the table to place side bets.

Evolution provides a lot of activity variants to these games but there are only two types of wheels; European single zero and American double zero.

Immersive Roulette uses multiple camera angles with the wheel spin recorded at 200 frames per second for a high-quality slow-motion replay at the end of every spin. 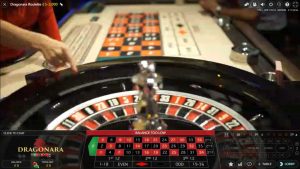 Most of the live games see the dealer spinning the wheel and dropping the ball about every 60 seconds. Speed roulette cycles out every 25 seconds. There’s no ‘dead time’ during the game as you only bet when the wheel is spinning. Great for players with favorite bets. Custom create up to 15 different favorite placements and use them on any table.

Each spin is done with two balls shot from a device. Two balls mean there are multiple betting opportunities that do not exist with the traditional single ball game.

This model uses high-quality gaming equipment and cameras, but no live dealer. It plays more like RNG games with up to 80 spins per hour. These tables usually have the lowest bet limits for European roulette.

All: Live interaction, any operating system, device, or screen size

French: Same as European except French words for call bets and the La Partage rule is offered on even money bets. If the ball lands in the zero, only half your bet is taken.

American: Double zero wheel and table mean your odds will not be as good as on the European games. However, some players like the excitement of the basket bet or five-bet, regardless of the house edge. The American tables have the lowest limits of all their tables. 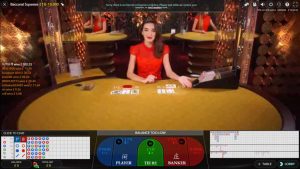 The digital table layout and camera angles are designed to give players an intimate feeling of casino action. Professional cinema-style cutaways, wide angles, and close-ups of the cards give the game an exciting and dynamic experience.

Dealers will greet you when you open the table and live chat is available throughout the game. As with other games, players type in some text to chat, and dealers respond over the high definition stream in their own voices.

All of the games offer extra statistics, roads, and bead boards.

Squeeze
More than 15 cameras deliver a nuanced game for lovers of the squeeze. The dealer’s reveals build excitement and suspense. Players can control the squeeze in Live Baccarat Control Squeeze with cameras mounted beneath the table.

Speed Baccarat
The pace is set to breakneck speed in this game with rounds averaging just 27 seconds, rather than the 48-second rhythm of the standard game.

Variant – Dragon Tiger
This is a simple and fast card game played with two competing cards. Players bet on choosing the highest ranking card or if they will tie. A full suite of statistics is available.

Super Sicbo is harder to find at Evolution powered live casinos but it’s a game well worth checking out if you can find it. It’s an ancient Chinese game using three dice, a popper/shaker, and a betting table. Multiple combinations paying anything from even money to 150:1 are available.

Evolution adds a new element of excitement to the game with random multipliers applied on some rolls after bets are placed and before the dice are shaken. The multiplier may be applied to no bets spots or several. Factors up to 1,000x are available.

While side bets can seriously dampen your chances because of the relatively poor odds, they are also he only way short of a massive streak to win a large amount of money playing against the dealer/house.

The Live Hold’em and Caribbean Stud progressive jackpots can grow quite large. Jumbo 7 is bound to grow into the multi-millions thanks to the fact that there is no cap on how high it can grow and it takes a 7-card straight flush to win it. All of the progressive bets pay out even if the player folds, so you really can’t go wrong on a lucky day. 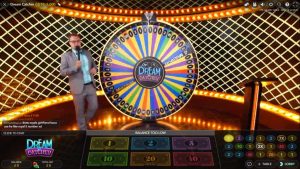 This is a fun money wheel game with gameshow atmosphere. The odds are not great, but the multipliers are compounded so predicting the right numbers with three 7x multipliers pays (Yx7x7x7) x343 bet. According to the Wizard of Odds, the best bet is $10 with a house edge of 3.42% and the worst bet is $40 due to a house edge of 9.19%.

The wheel itself is supplied by TCSJOHNHUXLEY, and the state-of-the-art studio is automated with lights, sound effects, and dynamic camera actions synchronized to the game’s action.

This money wheel game is an evolution of Dream Catcher and was developed in association with Hasbro. The game show combines the action of a live game with augmented reality in the bonus round.

Simply put your money on the number you think the wheel will stop on (1, 2, 5, 10) or make the bonus bet of 2 Rolls or 4 Rolls in order to enter the bonus game. There is also a Chance segment on the wheel with random cash prizes or multipliers.

As the game is played, a 3D Mr. Monopoly is hanging out to the side of the wheel, just waiting for a bonus roll. If you’ve bet on the bonus you can play the feature, otherwise, you can simply watch.

A virtual world will open up with the character scurrying around the board that has houses, hotels, GO, a Community Chest Jail, and Tax. Collect the winnings he brings you in 2 rolls or 4 rolls.

Any other disadvantages we can think of are intrinsic to live gaming in general, not this brand specifically. If a player doesn’t bet for several rounds they can lose their seat at the table. Most of the games with high volatility also have poor odds. Full vocal conversations are usually not available and bet limits can be high compared to RNG table gaming.

Evolution Gaming came onto the scene with one thing in mind, to become the biggest and best live casino game provider out there. Some may argue that Playtech offers a superior experience, but that is probably down to style and personal preference rather than actual quality or even the rules. Many of Evolution’s core games have an equal counterpart in the Playtech catalog.

Players can count on the same high-quality hosts and hostesses, HD video and clear audio no matter where they choose to play.