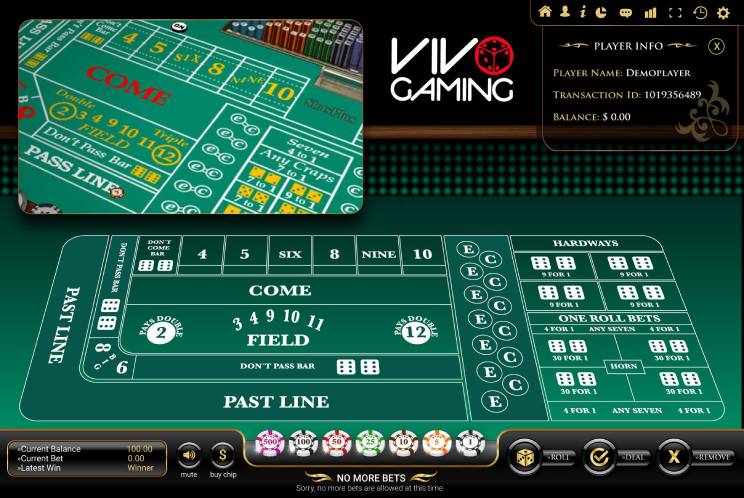 The iGaming industry in Canada has come a long way over the last couple of years. As many virtual casinos offer live dealer games, the popularity of this iGaming niche continues to rise with each passing day. Combining the best elements of the brick-and-mortar casino with the digital experience, the live casino is becoming a top choice for players, and live Craps is one of the favorites.

Justifiably, Craps is considered to be one of the most exciting and dynamic live casino table games. More importantly, it can be highly profitable, provided that you are well familiar with the rules and employ the right strategy. The high demand for the game has made the majority of software suppliers launch it, which is why you can now find craps at pretty much every reputable online casino. Until recently, it was almost impossible to find live dealer craps in an online format, that is, until Vivo Gaming came along.

Where can I play Live Dealer Craps?

You can play live craps at any online casino that uses Vivo Gaming software.  While there currently aren’t that many operators as of yet, we would recommend playing at BitStarz

Vivo Gaming is an elite online gaming software provider that emerged in the industry shortly after the introduction of the live gambling platform in 2009. This developer’s sole focus is the production of live dealer games, and many reviews have stated it as second-to-none at what it does. Vivo Gaming’s rich portfolio includes live poker, live blackjack, live roulette, and live craps. They provide live streams of their games from Costa Rica, London, Curacao, and other regions, with real-time operators running their software around the clock.

The company has teamed up with several larger companies to gain greater exposure for their games, including some of the big names like BetSoft Gaming and Rival Gaming. Vivo had also had a partnership with Net Entertainment until the Scandinavian software provider decided to launch their own live dealer games. Besides dabbling in live dealer casino games, Vivo Gaming has also composed a comprehensive package of front-end and back-office modules, as well as white-label solutions. This company is famous for being among the first live gaming suppliers to include live craps in their casinos.

As we have previously mentioned, Vivo Gaming live dealer games are broadcasted 24/7 from several private studios located in various parts of the world. All tables mimic the land-based casino environment both visually and in terms of sounds, thus making the gaming experience quite realistic. Thanks to the advanced technologies in use, players are not only able to see how the dealer conducts the games first hand, but it’s also possible for them to interact with the croupier or with the rest of the fellow players.

The quality of the video feed is fantastic, and the stream rarely freezes. You can find the settings in a toolbar that is placed discreetly at the top of the screen. There are several mini side-games being offered on the side so that you can play video poker and slots simultaneously in the same window.

Vivo Gaming is one of the rare providers that offer a demo system that allows players to try out the games without risking any of their own cash.

In order to provide players with the most realistic experience possible when they play online, the company offers several exciting features. For instance, thanks to the multi-game feature, it is possible to simultaneously play multiple tables, and play them all in one browser. Here are other unique characteristics:

Craps is highly prevalent in the Western world. However, not many software providers out there offer live craps, so this is a delight for any player who wishes to play it in this format. Vivo’s Live Craps features Vegas-style rules — there are two dealers to every table: one acts your host, while the other serves as the ‘Shooter’ (a person who rolls the dice). You can chat with your fellow players, discuss what stakes to place — all that from the comfort of your home.

The virtual betting table is placed at the bottom of the table, and players can place their bets by moving the chips to the relevant area. The wide betting ranges should suit any Canadian player’s budget, and they’re endorsed for fairness and safety. All the games use professional, charming hosts, and you can choose from European, Asian, or Latin-based tables. A lot of people believe that this version of Craps is the best of both worlds.

If you’ve ever played some of the classic casino games in a land-based casino setting, you’ve probably noticed that there is a difference with their online version in the way they’re played, the speed of the game, and the overall enjoyment of the game. To begin with, the live version of craps (and any other casino game for that matter) is much more sociable than the standard RNG versions. The majority of players at the craps table make the same bets. This creates a sense of camaraderie, while everyone is cheering for the same result. When you’re playing RNG craps, you won’t have any other players to be up against as you’ll play against the house every single time.

The pace of the game is noticeably lower in the live version because things like rolling dice, payouts, and the posture of your shooting are automated in the RNG version. The other difference you’ll notice between online craps vs live dealer craps will be the overall odds of the game. In the live version, the odds need to be kept more manageable for the players and the dealers as well, which is why they use the whole dollar amounts. In an RNG version, the payments will include cents as well, since the computer will be doing all the calculations for you.

Online craps use either Adobe Flash or HTML5 to depict the simulated game of craps on your computer or mobile screen. In live dealer craps, rounds of dice shooting are filmed from multiple camera angles and streamed live in real-time.