Many online casinos today offer a live dealer suite of streaming games. The vast majority of games available to players in Canada are streamed from eastern Europe. A few originate in studios and the casino floors of Malta, London, and Bucharest. However, there are also live dealer games streaming from studios right here in Canada! 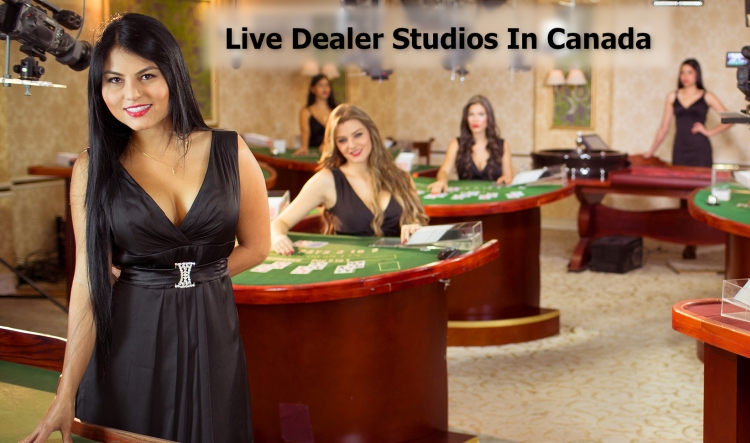 Microgaming has been serving up live dealer games like roulette, blackjack, baccarat, and casino hold’em to online casino players from their studio in Toronto since 2006.

A more recent addition to the Canadian landscape is Evolution Gaming. They launched a studio in early 2018 from Westminster Pier Park in Metro Vancouver, B.C.

Other live dealer casino service providers that have no studios in the country include but aren’t limited to:

While all of the live casino providers we list here are duly licensed in their appropriate jurisdictions, Microgaming and Evolution Gaming have also been awarded the coveted eCOGRA seals of approval – a very important benchmark in fair gaming, integrity, and reliability.

The studio in Ontario has been operating for over a decade. It is not their only live studio, and it isn’t their largest, but it is Canadian and has been operating and certified longer than nearly any other live streaming operation in the world.

Additional Microgaming studios have opened and closed throughout the years, but we have located them in the Philippines and even in Argentina.

Microgaming has been in the online casino business since 1994 – and while the details remain under dispute to this day, they do make the claim of starting the first real online casino. Along with their first in class mobile games released in 2004, it’s no surprise that they were ahead of most of the field when they launched the Toronto live dealer studio about two years later.

As more competition came into play, they improved their offering in fits and starts. In 2010 they went from a virtual backdrop to a true table-on-floor environment. The next step was to become the first branded live dealer studio in the world when Playboy Bunnies began dealing some of the games in 2013.

The provider offers about two dozen tables in the sum total.

This was the first game they offered from Canada. The experience has evolved as the industry has grown and competition has heated up.

The digital interface that allows players to see the roads/history, place bets, and play their cards is sharp and clear and doesn’t clutter the live dealer streams or gambling experience. Chatting with the dealers is not an option, but seeing others flirt with “bunnies” is not a draw anyway.

Multi-table play is possible for those who just can’t get enough at one table, Dragon Bonus and Pairs side bets are available.

Choose your bet limits to pick a table in the lobby. Choose your view – the table or the backdrop and dealer. Multiple camera angles are available.

Live roulette is one game that allows an unlimited number of players to bet on some tables. Where the ‘seats’ are limited you’ll have a chance to choose your own chip color. Statistics are available for those who enjoy betting with history in mind.

This is one of the most popular games for online players in Canada. The live blackjack rules are standard online 8 deck rules with commonly used payouts. With the “bet behind” option, you can always find a place to bet, even if all seven seats are filled. Simply bet along with another player until you get a chance to take a seat. The software will notify you when a seat becomes available.

This is one of the most recent games added to the Microgaming studio way back in 2015. The game offers single and multi-player options but you’re still betting against the dealer/odds/house.

Choose a table and limits, place a bet and start playing. The game is fast-paced and you’ll only have a few seconds to place your bets.

The interface is sparse, which adds to the interactive aspects of the game with the table displaying an ante box, call bet box and a bonus bet box.

The godfather of slots delivers a decent suite of games with the option for players to feel immersed in the Playboy vibe. However, if you prefer a more standard game with other high class, professional dealers and croupiers, it’s easy enough not to click the Playboy button.

All in all, Microgaming live dealer games offer players a chance to experience the excitement of a casino floor game without the need to leave home.

Evolution Gaming launched their Vancouver (Westminster) studios in early 2018 in a five year deal with the British Columbia Lottery Corporation (BCLC). In early 2019, the company announced it had also signed an agreement with lotoquebec.com to provide live streaming games from the Canadian studio – their first outside of Europe.

The expansion to service other Crown Corp online casinos was well planned for. The studio has about 16,000 square feet of floor space and its own stand-alone data center, another first for the company.

The lottery companies have access to dedicated and shared tables. Upon launch of the French site, called, Casino en direct, six new tables were deployed with one of them offering English speaking dealers, along with four of the existing tables also in use by PlayNow.com.

Evolution claims to be the only regulated live casino provider in the country. 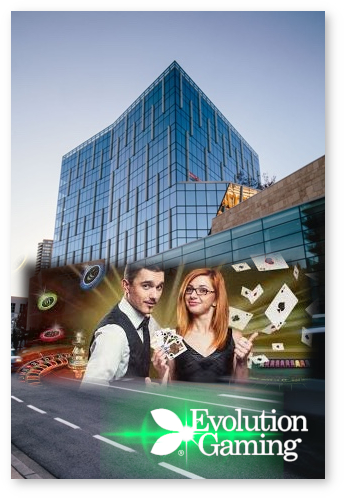 Although Canadians can play the games streamed from Vancouver, they are not streamed through offshore casinos. You’ll likely need to play at one of the provincial lottery online casinos to access the Canadian games.

But fear not. You can still play at over 100 Evolution tables from some of their other 8 studios! The international casino games suite found at Canadian casinos online is superior to the local lottery site games.

Following are some of the games you can play at casinos we list here. Not all sites will have all of the variants of the games, but there are plenty to choose from whether you visit LeoVegas with six suppliers or Sports Interaction which only hosts Evolution streams.

All games offer a choice of table limits.

Baccarat – Choose the 3D or classic view. Accepts side bets. Baccarat Squeeze, player control, and plenty of roadmaps, side bets, and camera angles. There’s also a speed version of the game.

Blackjack – Try Blackjack Party for a low stakes social experience or to “bet behind” when the tables are full. Side bets are possible in the straight blackjack game or when you have moved to a seat at the party table.

Caribbean Stud Poker – Evolution is one of the only providers to offer this game. Progressive jackpots and other optional side bets – one offers a 1000 to 1 payout.

Dream Catcher – This is a gameshow-style money wheel game with a live host and multiplier side bets. You’ll find it in nearly every Evolution Live casino suite.

Live Roulette – Depending on where you play, look for nearly a dozen variants of this time-honored game. Aside from the 0-0 American roulette wheel, the rest are mostly delineated in the way they are played – from speed roulette to Slingshot Auto.

Texas Bonus Poker – Another game played against the dealer without ever having to wait for a seat at the table. Optional side bets up to 1000 to 1 and a progressive jackpot are on the table.

Three Card Poker – It may take a few hands and you may want to study some strategy with this game, but it’s fast-paced, fun, and offers one 1,000 to 1 Six-Card Bonus and 100 to 1 Pairs Plus payouts.

Ultimate Texas Hold’em – Look for special side bets to make this game more exciting when you get three of a kind.

The games served up by the Provincial lotteries are great, but players have more variety to choose from when playing at an offshore gaming site.

As Evolution really does only one thing, and they do it very well, some of the technology is superior to Microgaming’s. Look for more crisp clear streams at any internet or data speed. The games are deployed using HTML5 framework to make multi-table play and transitions from one table to another seamless.