Ontario is a large and multilaterally diverse province in the east-central part of the country. Almost 40% of Canada’s population lives there with most denizens calling the southern portion home. The north and south parts of the province are so different they could seem to be two separate countries geographically, but the laws are homogeneous and people living in two different time zones are bound by the Ontarian commonality of humility and quiet pride that connects the cultural melting pot of metropolitan Toronto to the miner or woodsman living beyond North Bay. 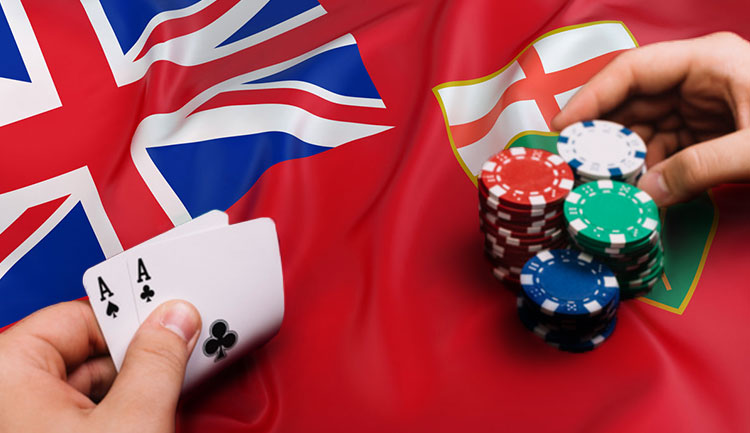 First Nation history is rich and the cultures run deep as do the more recent inhabitants’ ties to the land and waters. The land area of more than 1 million square kilometers (415,000 square miles) is larger than Spain and France combined.

From Caesars Windsor Casino near the US border and Detroit Michigan to Thunder Bay on Lake Superior to the northwest, or over to the proposed Hard Rock Casino Ottawa, or their current operations at Rideau Carleton Raceway near the border with Quebec – gambling is deeply entrenched in the Ontario culture.

While there are many charitable bingo and gaming outlets, we only find three First Nations casinos in the entire province. The Great Blue Heron Casino is located in the Mississaugas of Scugog Island First Nation. Casino Rama is located in the Chippewas of Rama First Nation, and the Wauzhushk Onigum First Nation is where you’ll find the small Golden Eagle Charitable Casino & Entertainment Centre.

The Ontario Lottery and Gaming Corporation and the Law 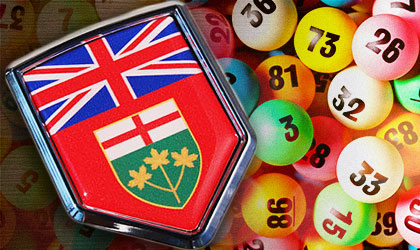 The Ontario Lottery and Gaming Corporation, or more simply OLG, is a Canadian Crown corporation owned by the Government of Ontario. Almost every legal gambling penny has gone through the agency in one form or another since 1975. Since then the OLG has returned some $47 billion to provincial communities.

Online and retail outlet lottery ticket sales, online parlay sports betting, online casino gaming, slot parlors and full-service casinos, and charitable bingo & gaming are all managed by the OLG, as are the slot machines at the province’s 15 horse racing tracks. The corporation is kept in check by the Alcohol and Gaming Commission of Ontario (AGCO) which is the provincial gaming regulator, and by the Minister of Finance, to whom it reports through its board of directors.

The oversight was previously provided by agencies such as the Gaming Control Commission Ontario through the Gaming Control Act 1992 which came about to control gambling as big casinos began to enter the Windsor and Niagara Falls areas. The agency was replaced by the AGCO with the implementation of the Alcohol and Gaming Regulation and Public Protection Act, Ontario in 1996.

Lottery Tickets
OLG sells lottery tickets online and provides a directory of retail sales outlets. Winnings of $999.90 or less can be redeemed at any retailer with the cash on hand, by mail, at certain slots and casino or at the OLG Prize Centre in Toronto. Some larger prizes can be claimed by mail and select slots and casino, but prizes over $250,000 must be claimed in Toronto.

Pro*Line
Online or at-kiosk sports betting is allowed for most contests, but no single event or live betting is allowed. Players must predict the outcome of 3-6 events with bets ranging from $2 to $100. In a nutshell, it is parlay wagering.

PlayOLG
The official sanctioned government provider of online casino gaming in the province is PlayOLG. The website offers a hybrid gambling experience with lotteries, slots, poker, table games, and more. You must be at least 19 and a resident of Ontario in order to play there. Many of the popular IGT games you would find in a major casino are available such as Siberian Storm, Texas Tea, Double Diamond, and Cleopatra.

All providers of Canadian lottery controlled online casinos such as IGT in Ontario and NetEnt British Columbia removed their games from the entire open Canadian market. So even though you can’t play NetEnt slots at PlayOLG, you can’t play them at any offshore casinos either. And although residents of B.C. don’t have access to IGT slots at PlayOLG, no offshore casino can supply the games to them. Thankfully there are hundreds of other online developers and providers, licensed in the UK, Malta, and Gibraltar who have not signed onto the monopoly board yet. 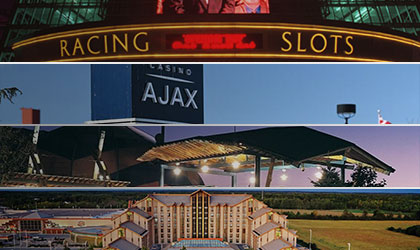 Ontario Racing is a non-profit association that has been recognized by the provincial government as the horseracing authority for Ontario since April 1, 2016. The new organization was formed as responsibility for horse racing regulation transferred to the Alcohol and Gaming Commission of Ontario (AGCO) in late 2015.

Following is a list of  racetracks with OLG slots:

The Casinos of Ontario

OLG is directly involved in one true casino – OLG Casino Brantford, which offers 540 slot machines, 48 gaming table, and 14 poker tables. OLG was formerly heavily involved in the Great Blue Heron [Charity] Casino. The Mississaugas of Scugog Island First Nation reduced their role in Great Blue Heron in September 2016 when the property transitioned from a charity casino to a commercial enterprise. Previously the MSIFN was in partnership with Casinos Austria running the table games while OLG took care of the slots business. While the Nation still owns the island and the casino property, Great Canadian Gaming Corp acquired the gambling elements in the Greater Toronto Area bundle. Great Canadian operations began Jan 23, 2018.

Following is a list of casinos on First Nations land in Ontario:

Following is a list of commercial casinos in Ontario

Following is a list of charitable bingo and gaming centers in Ontario:

Anywhere you go in the southern part of the province you will find gaming opportunities. Horse racing is alive and well in Ontario and the OLG supports the industry nicely. Lottery retailers are literally everywhere and online gambling is readily available. While most of the charitable gaming centers only hold a few machines, some are really quite nice. The big casinos are all well run and the future holds exciting changes with the GTA bundle going into effect in 2018. Great Canadian has big plans for Woodbine, near the Toronto airport.