Pelaa has been closed!

We suggest you try one of these casinos instead:

This Casino is Closed 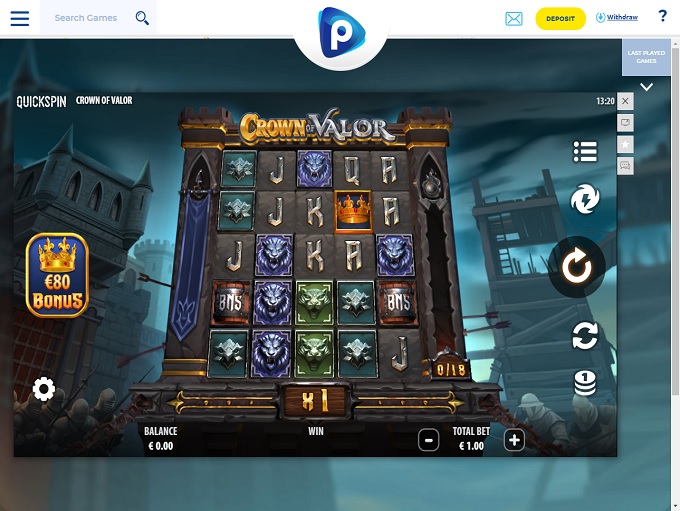 The Expert's Opinion:
Pelaa is part of the Genesis Global Limited group of online casinos. The site was originally launched exclusively for players in the Nordic region but is now available here (pending). The site offers a dizzying array of games for Canadian players. In addition to a license from the Malta Gaming Authority, the site is licensed for play in the UK by the Gambling Commission there as well as by the Swedish Gambling Authority, Spelinspektionen. Genesis is a trusted brand with a good assortment of games for Canadians. Sibling-sites include Spinit, Casino Cruise, and Vegas Hero to name a few. It’s a pleasure to list this top-tier property amongst our Best for Canada casinos.Tom Wilson, Editor

The Welcome Bonus for new players at SpinIt is a four stage deposit match bonuses worth up to $1000.

Required Deposit:To get the maximum bnus of $1,000 you’d need to deposit according to the following table
Small print: Wagering requirements of  x 40 the bonus

The play-through/wagering requirements are x40 on the bonus which is fast becoming the industry standard. Video slots (with a number of titles excepted) contribute 100% to the play-through, classic slots 75%, with all table and other games making minimal contributions. The minimum deposit required to receive any bonus is C$10

Bonus In Practice: To claim the maximum first deposit of $100 players need to deposit $100 and wager $4000. For the 2nd deposit you would need to deposit $600 as this stage match is 50% and not 100%.  To receive the full bonus you’d need to wager $24,000. These are the maximum deposits though, at each stage you can deposit less receiving a smaller bonus but with lesser wagering requirements in turn.

Bonus Sum Up: Taken alone the $1000 welcome match bonus is very much a standard sign-up offer. The good part of it being the 100% match on the first deposit, but the wage requirements on subsequent deposits are a bit too high and you’re better off playing elsewhere.

Gaming License: Pelaa is licensed by the MGA, which is the overreaching European gambling authority. The Canadian government doesn’t license offshore real money gaming sites yet, so they haven’t applied for nor been awarded a Canadian license. They were approved for a January 1, 2019 launch by Swedish regulators and have held a license from the Gambling Commission in the UK for quite some time. These three licensing jurisdictions require stringent adherence to all regulations. The fact that Pelaa is licensed in Sweden, Great Britain, and Malta is the best we can hope for in an offshore casino.

Responsible Gaming: Pelaa offers players a host of responsible gambling tools. Some are required in certain jurisdictions such as Sweden. All players are able to set spending or time limits. Increases require a cooling off period, while decreases are effective immediately. You can also set up a break for up to six-months or permanently. However, please use the self-exclusion tool carefully as you will find yourself excluded from all Genesis properties if you opt for a ‘permanent’ break.

What Deposit Options are Available at Pelaa?

What Withdrawal Options are Available at Pelaa?

Pelaa was an instant sensation in Finland and Sweden. However, we’re unable to find much feedback from customers on English language, Suomi, or Swedish forums. This is actually a good sign as more than 70 percent of Finns and over 86 percent of Swedes speak English and we find no complaints or negatives comments anywhere about the site.

Negative comments have appeared as well

Having reviewed several Genesis Global casinos before listing them here, we have also looked at the history of each of the operations going back to the launch of Casino Cruise in 2014. Most of the complaints in the first year of operations were about games dropping out in mid-play, bonuses not being credited, and occasional identity verification problems of new players. Each of these was attended to professionally and many of the inaugural players are still loyal customers today.

The platform now delivers mobile games separately from desktop titles which added greatly to the stability. The bonus system has been fine-tuned and claiming them is simple now. We still see an occasional complaint by players who have trouble with their documents, but these usually turn out to be either self-excluded players or crafty bonus abusers trying to open multiple accounts. One major complaint against Vegas Hero, a companion brand, seemed to suggest the operators were in the wrong. However, private detailed game play information provided to Maltese authorities resulted in the regulators ruling in the casino’s favor.

The casino operators are well known as “straight shooters”, and our knowledge of at least one of the co-founders goes back decades. In order to give a balanced and unbiased review, untarnished with admiration for individual owners, we have scoured half a decade of history to present an objective analysis.

While we do find some issues that have not been closed or marked as solved for some of the older sister-sites, that may be down to webmasters not closing complaints after a player has been paid or otherwise satisfied. We don’t find any known incidences where the casino made a mistake and refused to admit it and make the player whole.

The fact that they operate under the watchful eyes of Maltese, UK, and Swedish regulators speaks volumes about the credibility of this and other Genesis venues.

The game selection here is truly phenomenal. The casino platform delivers well over 1,000 games for Canadians including a live dealer casino. The name, Pelaa, simply means “play” or “playing” in Finnish. The site is available without a download or any need for a mobile app. All games play right in your browser.

Look for favorites like Mega Moolah from Microgaming, Play’n GO’s Rich Wilde and the Book of Dead, Holmes & the Stolen Stones from Yggdrasil, ELK Studios’ Platooners These and hundreds of other smashing titles are right at your fingertips no matter how you access the casino.

Slots are the favorite game of most Canadian players, followed by blackjack, according to government research focused on the Provincial and First Nation casinos. While offshore gaming sites don’t provide the same detailed information, it’s easy to see by the sheer volume of video slots that they are also the favorite games of most online players.

The majority of the games on offer at Pelaa are the same titles players in the online gambling thirsty Nordic region play, giving us Europe’s best game selection. While highly volatile Microgaming slots like Immortal Romance have their hardcore following, so do some of the older games such as Tomb Raider, Thunderstruck, and Break Da Bank. Longtime MGS players will often have a favorite generation of games such as the serial titles TombRaider II: Secret of the Sword, Thunderstruck II, or Break Da Bank Again.

However, there’s no need to stay with your old favorites when other, newer premium gaming labs like Genesis, Red Tiger, and Lightning Box offer such a diverse array of games, themes, math models, and feature mechanics.

Clicking the Slots & Jackpots menu icon will bring up enough games to keep any player spinning happily for years. By the time you reach the end of the list, a whole new generation of games will have been released. The non-progressive video slots are available for practice play so you can try out an attractive game without risking your own money.

Look under the Casino Games icon to find animated random number generator (RNG) versions of the felts and tables you are drawn to on a casino floor in Province. One advantage to playing at an online site with so many games is that you will find variants and rule sets that simply aren’t available at any single brick and mortar casino on earth.

The RNG roulette offering is just as impressive with every possible set of rules and house edge you want to play – even if you have an affinity for two Zeros rather than the lowest house edge possible on a French roulette table.

Between video poker and table pokers played against the house, look for over 50 titles from Jacks or Better single hand to Double Double Bonus and from 3 card poker to Oasis, Stud, and Hold’Em.

The selection of games optimized specifically for mobile players is impressive. Play slots, blackjack, or even live dealer games right in your web browser. If you see the game on your handheld, and there are over 500, you will be able to play it.

Jackpot games are a click away at home or on the road. The live dealer games are delivered in HTML5 for speedy load times and an instant transition from game to game. Players are able to register, deposit, play and withdraw on any iOS, Android, or desktop device without the need to download apps or software.

Note: If you are playing near the border from a mobile device, be sure to adjust your phone settings if needed so the geolocation override won’t locate you in the U.S. It’s a rare occurrence but a simple problem your carrier can help you fix in your phone’s settings if you play near the border.

Evolution Gaming streams live dealer games in multiple languages from studios and casino floors all over the world. Unfortunately, if you want to play a remote game from their Canadian studio, you will need to play at a provincial lottery online casino site. The company has other studios throughout Europe that still allow Canadians to play.

Games from casino floors at the Dragonara Malta, Hippodrome London, and Grand Casino Bucharest are available if you prefer the excitement of a bustling casino floor.

Baccarat, in several iterations and table limits, is on tap 24/7.

Specialty games like Football Studio, and the Dream Catcher money wheel can be a nice diversion as can Blackjack Party. These three are perhaps the most social games on the site, but you can chat with the dealers in all of the games.

Pelaa Casino is a fresh offering for online players in Canada. Thanks to the gaming platform’s engine, the site will remain fresh with new games, new jackpots, and new incentive offers indefinitely. After careful study, we have found the operators to be in a class of their own, deserving of our trust, and easy to recommend.