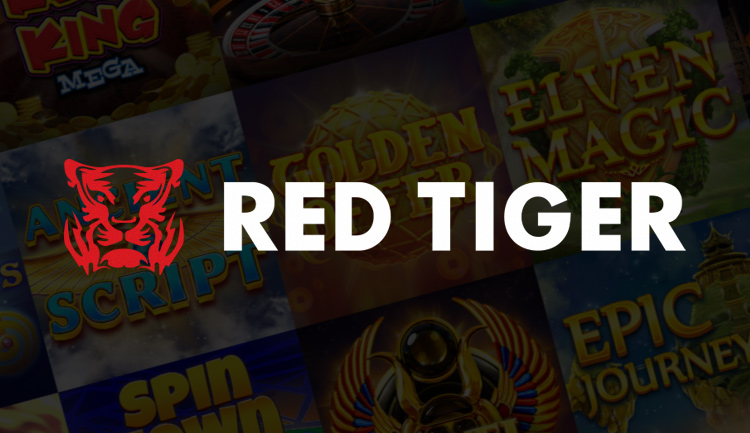 Red Tiger was founded in 2014 by a group of gaming aficionados with years of experience in B2B and B2C gaming brands and with the desire to bring something new to the gaming table. They are based in Douglas, Isle of Man, UK, from which they create and release top slots and table games, but they also have offices in Malta and Bulgaria, totalling over 200 software engineers, gambling experts, graphic designers, and mathematicians employed on their various projects.

All this recognition probably wouldn’t be possible if the Red Tiger Software wasn’t a fully licensed and regulated software provider with permits from the leading authorities such as the UK Gambling Commission, Malta Gaming Authority, Alderney Gambling Control Commission, and HM Government of Gibraltar.

As far as the gaming software that powers Red Tiger’s slots and table games is concerned, Red Tiger employs the latest HTML5 technology to create a highly interactive and optimized gaming experience that will work seamlessly on all types of devices, both desktop and mobile ones.

The use of such software not only brings about superb gaming experience but also allows the Red Tiger games to be compatible with all types of desktop operating systems like Windows, Mac, and Linux, as well as mobile operating systems such as Android and iOS. Red Tiger creates games for instant play modes in online casinos, which means no additional software download is required to play Red Tiger games, you simply need a working web browser.

With consideration to the Red Tiger gaming portfolio, one must start with their own motto ‘We live and breathe casino slots’, which is confirmed with a mere look at the gaming options. At the moment of writing this review, there was a total of 110 slot games, with the most diverse themes, playing opportunities, and bonus features. Red Tiger Gaming is mostly focused on Asian and European markets, so many of their games are based on themes from Asian and European cultures, like the slots Chinese Treasures, Dragon’s Luck or the Three Musketeers and Lucky Halloween.

Video slots comprise the biggest section of their gaming portfolio and are the bread and butter of Red Tiger Gaming. Although there are just slightly over 100 of them, these slot games are quite diverse in terms of the shape of the playing grid, the number of paylines and reels, and playing features.

The visual aspect of these games is top-notch, with numerous 2D and 3D slots in HD quality. When it comes to the playing grid, the Red Tiger slots feature titles with as low as ten paylines, like Dragon’s Luck slot, but will also have titles with Megaways™ technology like Dragon’s Fire Megaways™ with up to 117,649 betways and seven reels.

There are many other slots from Red Tiger that have already built quite a fanbase, such as Ten Elements with ten different forms of Wild symbols, or Chinese Treasures with above-average 96.31% RTP. Also, players who are keen on significant jackpots relish the opportunity to win 2,000x the stake in Wild Wild Chest or 1380x the stake in Dragon’s Luck.

Red Tiger Gaming is issuing new slots at a rate of 25 new slots per year, which means the list of slots is regularly replenished with novelties. The currently highly anticipated slot that is scheduled to appear in the gaming offer at the beginning of 2020 is Jewel Scarab, the latest of the Egyptian themed slots. The Jewel Scarab is going to be a high-volatility 5-reel and 9-paylines slot with enormous jackpots worth 5,000x your original stake.

The choice of table games, unlike slots, is a significant drawback for Red Tiger. There are only 4 table games available under this section, and despite being designed well and quite functional, they lack in diversity. You can only play Classic Blackjack, Deal or No Deal Blackjack, European Roulette, and Baccarat.

The iGaming industry is hugely competitive, and to stay on top, software developers are required to use all their ingenuity and come up with novel playing options all the time. Red Tiger understands this better than most, which is why they produced unique progressive jackpot systems and gamification services to offer to casinos, and most top online casinos such as Rizk, Betsson and Casino Heroes have already jumped the wagon.

Daily Drops Jackpots is a network system established by Red Tiger that provides the casino with a chance to reward their players on a regular basis. The jackpot network can be integrated with all types of slots and functions as a network of three different random progressive jackpots that drop at the appointed time.

All online casino players have noted the success of the Daily Drops Jackpots because, ever since it was released in April, it has paid out more than €8million in jackpot prizes, and the number is set to increase with the addition of hourly jackpots.

Smart Spins is an exclusive unique bonus platform from Red Tiger that allows casinos to offer players unlimited spins for a limited time as an entirely new way of incentives for players. This marketing tool is quite compelling and, together with the innovation in design that sends in-game messages to players telling them when the Smart Spins are expected and how to activate them, is extremely valuable for slot players.

What Does the Future Hold for Red Tiger?

In recent months, there have been tectonic changes in the Red Tiger company. Namely, in September 2019, Red Tiger was purchased by NetEnt in an all-cash deal reportedly worth £200 million, plus an additional £23 million due in 2022. This major acquisition came as a result of NetEnt’s long term plan to ‘create the future of gaming’.

As Red Tiger reported, the earnings before interest, taxes, depreciation and amortization (EBITDA) are expected to reach £18 million for the full year 2019 and, together with the revenue from NetEnt, it will help Red Tiger expand its influence on the market and reach a bigger audience. Also, as NetEnt was granted a permanent license by the New Jersey Division of Gaming Enforcement to offer its games to New Jersey residents in a legitimate and regulated way, it is safe to say Red Tiger’s games will find its way to new customers who can enjoy their exciting features and jackpots, thus securing the further growth and development of Red Tiger.