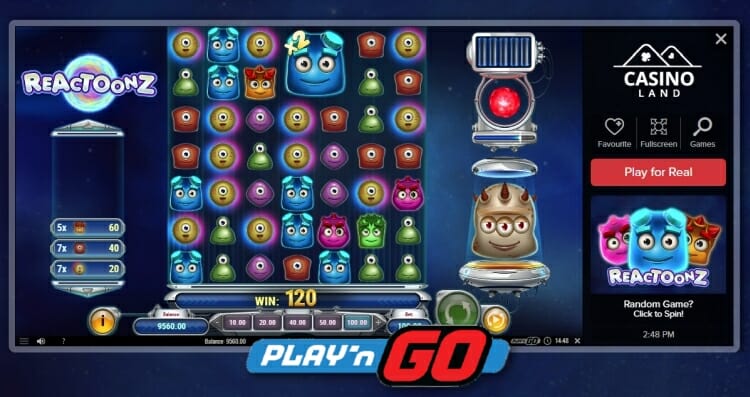 Play’n GO CEO, Johan Tornqvist said: “We’ll once again be taking players on an immensely enjoyable journey into deep space to visit the Reactoonz,” according to a recent press release from the company.

All wins in the base game help to increase five Quantum Leap charge meters one at a time. When a meter is fully charged a Quantum feature is added to the queue at random. Implosion, Alteration, Demolition, or Incision can be triggered. When all five meters are charged the Gargantoon feature gets added to the queue releasing a 3×3 random symbol to the grid. When winning cascades are completed it becomes a 2×2 symbol and then 1×1.

One place the Play’n GO genius comes into play is during special features like “Instability” and “Fluctuation” that keep the base game interesting while waiting for the meters to charge up.

Extraterrestrial monster symbols on the reels have 1, 2, or in the case of Gargantoon, 3 eyes. In Fluctuation, a random one-eyed symbol is labeled as a fluctuating symbol. If any fluctuating symbols become part of a winning spin they will leave two wild symbols in their wake to substitute for any other icons.

After a non-winning spin Gargantoon can drop 4 to 8 wild symbols into the grid, firing up the game again. Whenever 4 or more matching symbols form a square they turn into Giantoonz and become 2x multipliers.

Play’n Go is based in Växjö, Sweden and is licensed in multiple jurisdictions including the UK and Malta. When playing Reactoonz at Casino Land in Canada, the game is licensed by the Alderney Gambling Control Commission (AGCC).  All of the games at Casino Land, including their live dealer studio streams, are available for play on mobile, tablet, laptop, or desktop devices without the need to download or install any apps or software. The HTML5 games play in any web browser.

Casino Land launched in late 2015 and carries games from Play’n GO, Microgaming, and BetSoft as well as a live dealer casino powered by Evolution Gaming. Tom Wilson of Best Casinos Canada had this to say about Casino Land: “When so many casinos are trying to dazzle with glitzy colour schemes, gimmicks and promises which can’t be delivered, it’s nice to happen upon a new casino brand that is trying to do things its own way.”