One of Microgaming’s most popular slots is about to gain a sequel in Agent Jane Blonde Returns. The game was previewed at iGB Live! 2018 in Amsterdam where the releasing company felt so strongly about announcing the game that they branded their entire stand at the trade show with the slot. 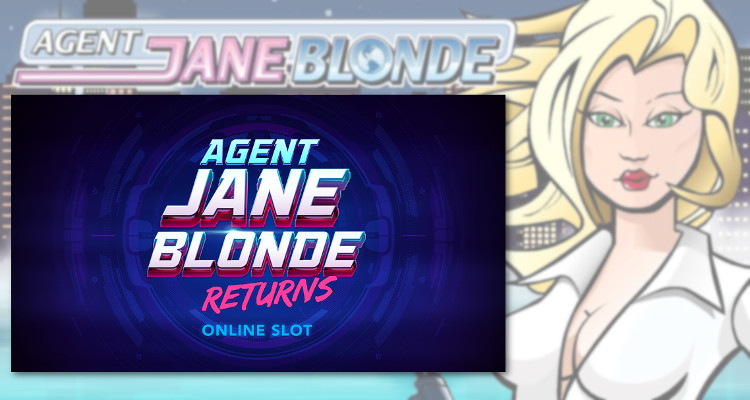 The game was developed exclusively for Microgaming by Stormcraft Studios. It’s the lab’s second release since the partnership was announced last month. The first slot released under the studio’s own name was the steampunk-inspired Fortunium, a game that was featured in a special sneak peek at February’s ICE Totally Gaming in London, England.

All of Stormcraft Studio’s games are developed and released in the newer, future-proof HTML5 instant play mobile and browser format. To learn more about instant gaming please see the Best Casinos Canada No Download Casinos page.

From the creators of Mega Moolah and Immortal Romance

Stormcraft is no stranger to creating hit games for the Isle of Man company, and it doesn’t take much of a stretch of the imagination to assume that the people behind the new studio created the original Agent Jane Blonde. The development team has been creating games for Microgaming for decades. Known titles include Immortal Romance and Mega Moolah.

The original game was released in 2005. It had five reels with three visible symbol positions on each reel and 9 paylines. Scatters, wilds, and free spins with 3x multipliers and base game jackpot of 10,000x line bet gave players from $0.09 to $45 per spin a license to thrill.

The follow-up game offers a new maths model with 15 paylines. However, the paytables haven’t been released yet so the prize structure and some of the bonus mechanics are unclear. New features not found on the pilot title will include stacked wilds and a respin feature.

One thing we can be certain of is that this game will be a hit. The developers and marketing people know that today’s market is far more competitive than it was over a decade ago when Agent Jane Blonde rose above many of the two-dozen titles released that year. Her popular has certainly withstood the test of time as evidenced by the choice to give the game a franchise by creating a sequel.

Expect the same great cartoon artwork to carry over with Jane sporting various disguises as well as the replacement of lower paying 9, 10, J, Q, K, A symbols with themed icons.

What we do know for sure is that the look is throbbing neon and the graphics are retro-inspired.

Stunning graphics and an atmospheric soundtrack

David Reynolds, Games Publisher at Microgaming spoke of the upcoming release in a recent press release:

“Following the huge success of Fortunium, we are so excited for Stormcraft Studios’ next release with Agent Jane Blonde Returns. With stunning graphics and an atmospheric soundtrack that brings you into Agent Jane Blonde’s world of action and espionage, it’s sure to be a hit with both fans of the original and new players when it goes live.“

Stormcraft’s first Microgaming release was unveiled in late February but not released for another 120 days. We can only hope Agent Jane Blonde Returns before late November. Look for her at any Quickfire partner casino.