Quick verdict: Reactoonz is a video slot game more akin to games like Candy Crush than typical slots. There are no paylines, and the grid is highly unusual for a slot game — 7×7. However, this hasn’t prevented the Play’n GO title from becoming one of the most popular games in the Play’n GO library. Throw its high volatility and above-average RTP of 96% into the mix, and you get yourself an exhilarating slot game worth playing.

Reactoonz is a slot game set in a parallel universe filled with aliens, strange powers, and exquisite prizes for players. It’s a sequel to Energoonz, so it’s not surprising that the game follows the same story and same format.

The goal of the game is to connect the same aliens with every spin and please the evil Gargantoon alien sitting on the right. The more aliens you manage to connect, the more his energy level rises. When it reaches a critical level, he’ll leap into the game and start a chain reaction that will benefit you greatly, as this is the main feature of the game.

Visuals and Sound Effects in Reactoonz

The game is superbly animated, with gorgeous and colourful graphics. The entire main screen is neatly organized and made to bring you further into this strange universe with aliens and quantum powers.

All symbols come in the shape of small aliens who keep moving and making noises, while peculiar yet exciting background music is heard. There’s also the massive Gargantoon alien, following the show attentively, as long as you keep playing. But as soon as you stop spinning the reels, he’ll quickly fall asleep and grace you with constant snoring. The entire setting is entertaining and quirky, so everyone who loves such joyful slot games is bound to adore Reactoonz. 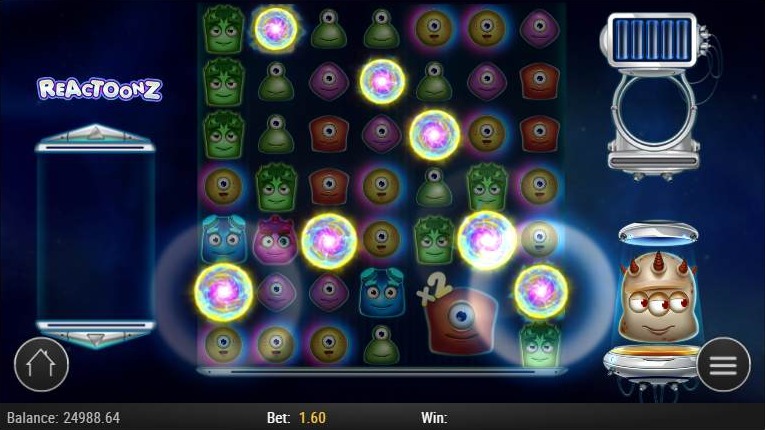 The gameplay of Reactoonz is straightforward. You only need to choose the bet amount and start spinning. There are buttons to help you pick the exact bet amount, and it can be anywhere between 0.2 and 100 coins.

Playing the game is incredibly exciting, though. The 7×7 grid with no paylines resembles games like Candy Crush, and the main objective is the same as it is in those games. You spin the reels as you would in any slot, but to win, four or more of the same aliens need to connect. Each alien pays differently, so in that respect, the game is similar to regular slots.

Also, there are smaller, one-eyed aliens, and with every spin, one is marked as the fluctuating symbol. This means that if two of these become part of a winning combination, they’ll turn into Wilds and stay on the grid to substitute for any other symbols.

As for other gaming options, there is a detailed Autoplay feature you can use at any time. It is activated by pressing the button right next to the Spin button. Outside of that, the game also allows you to turn the Fast Play option for faster gameplay.

Wilds and Bonuses in Reactoonz

The main feature of the game is the Gargantoon feature that works in the background with every spin. In essence, the more connections you make within a single spin, the more the power bar of the Gargantoon alien fills up. If it reaches critical mass, the massive alien will appear on the 7×7 grid.

If you win on 25 symbols, a random Quantum feature will be added to the power bar. Once four of these are added, the fifth one you get will turn into the Gargantoon, i.e. the massive alien who appears on the grid.

The alien starts as a 3×3 massive monster, then divides into 2×2 Wild symbols, and then they turn into nine smaller Wild symbols. All of these symbols cascade from top to bottom, bringing you massive prizes in the process.

Even though this is the main feature, the four Quantum features you get before Gargantoon are also rewarding. Each does something unique:

In the end, there is also the random Instability feature. In every non-winning spin, you have the chance of getting four to eight Wilds anywhere on the grid. This can significantly increase your winnings, depending on where and how many Wilds land.

Reactoonz has an above-average RTP of 96% and high volatility. This means that the game tends to reward you more than enough, but it’s also very unstable. You’ll get sporadic wins, but they’ll be quite large.

The RTP is what matters here, as it clearly shows that the game will give you a lot of your money back, while the volatility indicates that you’ll also have a good chance of receiving some incredibly high wins if you play long enough.

In summation, Reactoonz is a great slot game, one of the best and most popular Play’n GO has to offer. It’s different from most video slots with its 7×7 grid and no paylines, but that’s precisely what makes it so appealing.

It has stunning graphics and lovely sound effects and melodies, but it’s also abundant in the special features area, especially with the highly rewarding Gargantoon feature. Couple that with the great RTP percentage, and you have yourself an enjoyable slot game worth playing.