While many developers are rolling out holiday-themed slots, 3D cinematic gaming innovator Betsoft has struck out in a new direction this December with an Egyptian themed cluster ‘slot’ under the title, Legend of the Nile. Betsoft has been creating unique games for over a decade, but this is the first big 6×6 grid format we’ve seen from them with cascading reels and exploding wins. The game was released to Betsoft partner casinos such as Mr Green, LeoVegas, Rizk, and Dunder on Wednesday, December 15, 2017. 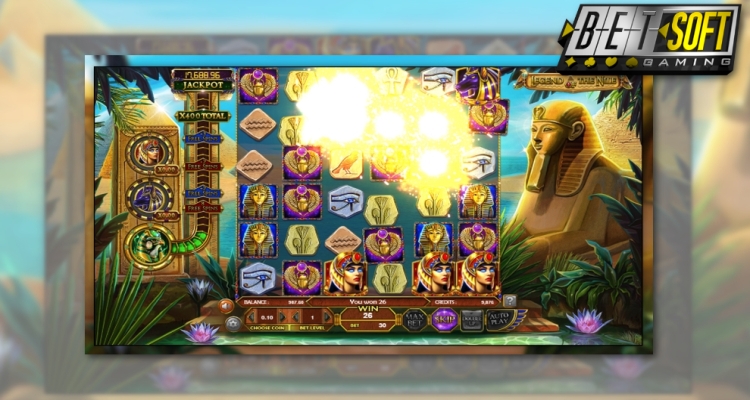 While there are no reels spinning in slots, the columns are close enough for the non-purist. And while there are no pay lines, it still requires certain combinations to win, so if you stretch your imagination you can call it a slot, but we’d prefer “arcade game” or “hybrid” because that’s what it really is.

With that out of the way let’s look at some of the symbols and some of the bonus elements. In order to win a round, all that needs to occur is that 4 matching symbols touch each other in any direction after coming to a rest. After four or more contiguous symbols match up they will explode and new symbols will fall in from above to fill the empty spaces. The fixed bet size is 30 coins ranging in value from $0.02 to $1.00. Bet in multipliers of 1-5 coins for a minimum stake of $0.60 and a max bet of $150.00 per paid game round.

There is a wild symbol that pays 6,000x coin size x coin multiplier for 20 or more. The wild pyramid symbol substitutes for any other except the Gods which are depicted as Ra, Anubis, and Isis. These symbols represent the bonus elements known as God Trails. These are meters that advance with every subsequent winning cluster involving a particular God symbol.

With each win involving an Isis cluster, the Isis trail will progress. This meter continues to charge until it is filled which will trigger free games. Each spin awards a progressively larger payout.

The Anubis Trail functions just like the Isis Trail, except that when free spins occur the value of Anubis symbols goes way up and more of them appear during the feature.

The Ra Trail doesn’t accumulate power from one paid spin to the next. However, with every subsequent winning cluster it advances and after 8 in a row it starts to add free spins at intervals and eventually could hit the 400x total stake award and if driven deep into Egypt will award the progressive jackpot after 20 consecutive winning spins in a row. The odds of winning the progressive are much like buying lottery tickets, the more you bet the greater your chances.

If you bust out or decide to play another game altogether your meter progress is saved for when you return. 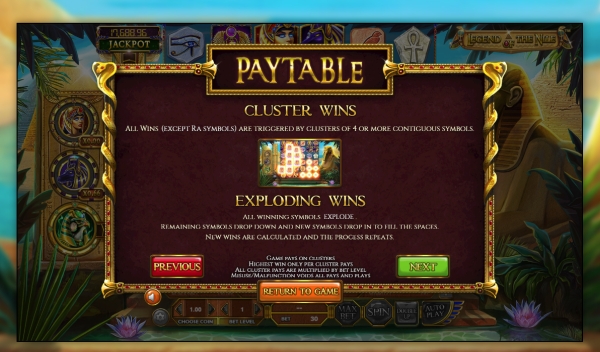 Dan Cooper, Head of Product Development at Betsoft said: “LEGEND OF THE NILE is a Betsoft game quite unlike any other. Created exclusively for our Shift platform, LEGEND OF THE NILE takes the traditional, familiar Egyptian theme and updates it for modern iGaming. What we’ve done with the God Trails stands out in terms of innovation, giving players three separate potential bonus options during play that will keep things fresh and exciting.

“And with two of the three God Trails persisting through game sessions, players will want to return to LEGEND OF THE NILE for additional play. These incentives create loyalty and a fun sense of dedication to this game.”

PREVIOUS ARTICLE Gateway's Plans for New Casino in London Revealed
NEXT ARTICLE If Bell is Seeking Internet Censorship, Who's Next?