The world’s largest live dealer casino studios are located in the Latvian capital of Riga. Playtech began moving all of their live dealer streams to 8,500 sqm (90,000+ sq ft) of studio space in Riga Old Town a little over a year ago. The next generation facilities sit atop the ancient city’s fortified 16th-century walls and dwarf even the largest of studios elsewhere. 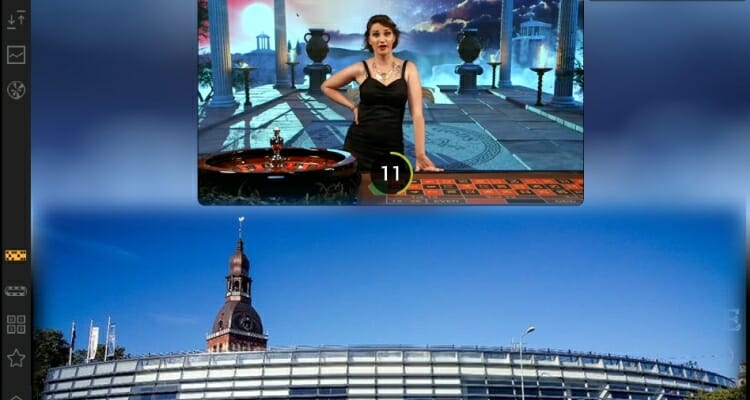 Soon after acquiring the site that now serves Canadian online casinos like Casino.com  in mid-2016, developers began converting the facilities into state-of-the-art streaming table game venues. The company was able to maintain service from their core studio while gradually putting new areas into use as remodeling made them available in a phased execution of what must have been a meticulously laid out plan.

Sky Casino was the first to stream their games from the new site earlier this year. In the following 12 weeks, other big names like William Hill, bet365, Coral Ladbrokes, and Paddy Power-Betfair migrated over and began operations in their new studios.

Playtech designed and deployed each room to the individual casino’s specifications and since opening, the dedicated rooms have seen an influx of new players while operators have commented about how excited they are with the new facilities and their abilities to scale up to increasing demand. The studios are said to be “future proof”.

Shimon Akad, COO, Playtech, said: “Playtech demonstrates its absolute commitment to delivering the best Live Casino experience and this project is significant testimony to it. From making one of our largest ever investments and redeveloping this site into the world’s largest Live Casino studio, to completing the largest Live customer migration ever seen, it’s been an exhilarating, non-stop journey and there is much more to come.”

He added: “Getting to this stage so quickly and without any issues is due to the enormous dedication of the team. I’d like to thank everyone who has contributed to this project for achieving what is, without a doubt, the world’s most cutting-edge, best-performing, next generation Live studio,” said Akad.

Custom made tables and gaming areas, hundred of state-of-the-art cameras and an advanced lighting system, cinematic greenscreen technology allowing Playtech to create any imaginable environment, as well as a mission control center and large dealer school are all part of the new facilities.

In a press handout Thursday Playtech described the new offering as presenting players with the ultimate, never-before-seen gaming experience.

Many of the live dealer games share themes with popular slots found at Playtech casinos, like the one pictured above with an Age of Gods series theme.

Playtech Release Age of the Gods - King of the Underworld
4 years ago
Views:1675 Comments: 0