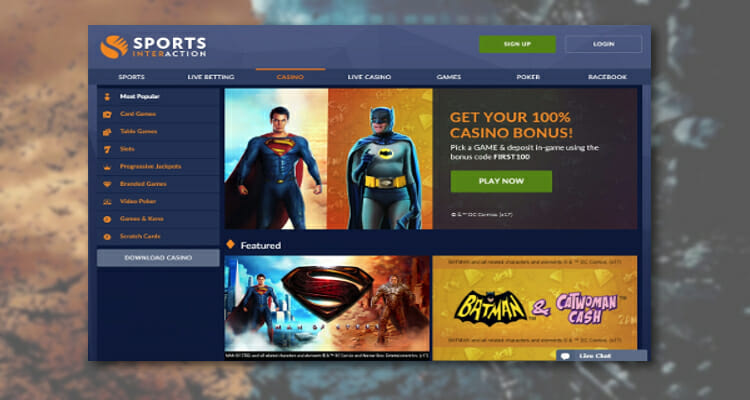 Mohawk Online Limited owns and operates Sports Interaction and holds licenses from the Channel Islands-based Jersey Gambling Commission as well as the Kahnawake Gaming Commission who regulate their operations.

The portfolio of premium slots on offer add to other Playtech titles already available and include games drawing on features from the classic 1960s Batman television series as well as content from the Superman and Superman II movies, and Man of Steel. The 2001 Green Lantern movie is also a source of theme and graphics for one of the games.

New content springing from the February license extension deal that will be found at the Mohawk site will include the currently under development titles – The Dark Knight Trilogy, Batman v Superman: Dawn of Justice, and Suicide Squad among others.

Each of the games will have its own DC Super Heroes Jackpots. The progressives offer four tiers and increase in value with every bet made on the game. When one of the tired jackpots is awarded in full, it is reseeded by Playtech to begin growing again. The Mini jackpot begins at $100 and the Grand begins at $200,000 with the intervening tiers offering lesser amounts than the Grand. Simply triggering the Jackpot Game guarantees a prize and players can either pick among 30 items to win or simply let a half-minute clock run out to see the results. If all 30 Orbs are activated the full jackpot is awarded. Lesser amounts award smaller prizes.

Grand Chief of the Mohawk Council of Kahnawake, Joseph Norton, said: “This is truly a landmark achievement for Mohawk Online, it is exciting to occupy the same stage as international corporations such as Playtech and Warner Bros Pictures.”

Dean Montour, CEO of Mohawk Online Limited spoke of the gaming site’s low deposit and betting limits in comparision to some other Canadian online casinos and related how that was central to how the First Nation-owned betting recreation site operates in regard to responsible gambling. He added, “As the world’s leading supplier of casino games, Playtech is an ideal partner – a reputable, publicly listed UK company that is highly-regulated and trusted the world over, with its branded content instantly recognizable and great fun to play.”