Quick verdict: Vikings Go Berzerk is a popular title from Yggdrasil. It follows the sea-fairing adventures of four brave Vikings as they face evil mermaids. The slot offers plenty of great bonus features, such as the Berzerk Mode, Free Spins, and more. Players can also land treasure chests and receive additional benefits during the base game and the Free Spins round. The game has an RTP of 96.1% and offers 25 fixed paylines on a 5×4 grid.

Vikings were mighty people, inspiring all kinds of artists and creators, including the designers and developers at Yggdrasil, who created a Viking-themed online video slot. The setting is a Viking longship, where you get to spin the reels and collect all kinds of coins. You’ll also find four Viking warriors on the reels, acting as high-paying symbols.

Yggdrasil is a Swedish company named after a sacred tree from Nordic mythology, so it’s no wonder that it focused on making Viking-themed slots.

Vikings Go Berzerk is yet another adventure for the Vikings to embark on. This time, their quest is to face mighty mermaids and make the seas safe for travel.

This game is a sequel to Vikings Go Wild and the predecessor of Vikings Go to Hell.

You’ll get the impression that the longship is moving thanks to the animated sea in the background. The longship is surrounded by several mermaids, which fit the fantastical game world perfectly.

The epic yet relaxing background music can switch into a tense rhythm-packed soundtrack after you click the Spin button, creating a unique sea-fairing Viking experience. 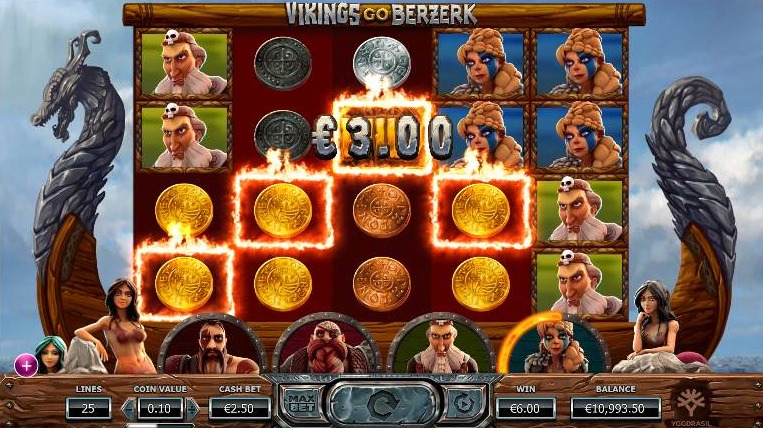 Vikings Go Berzerk is a very easy-to-play online video slot with a couple of exciting bonus features. It has medium-high volatility, meaning it’s aimed at players who are willing to take some risks.

Apart from the Spin button and coin value selector, there are two additional options in Vikings Go Berzerk — Max Bet and Autoplay.

Max Bet will automatically set the wager to the highest possible amount ($125). The Autoplay feature allows you to select the number of spins you want to execute automatically. The maximum number of automatic spins is 1,000. There’s an option of infinite auto spins, meaning the reels will keep spinning as long as you have money in your balance (or you stop them manually).

The Wild symbols can substitute any other symbol on the reels except for Free Spins.

A mermaid represents the Free Spins symbol, and if you collect three of them, you’ll receive a total of seven free spins + a bonus. Four will grant you 14, and five will land you 21 free spins as well as a bonus.

Once the Free Spins round starts, the Vikings will begin fighting the evil Siren. However, before that, a random bonus feature is selected. Here’s an overview of all features you can get:

A treasure chest will always land on the fourth reel, and it usually contains five prizes. However, you can only choose one. The crate can also land in the Free Spins mode, but the rewards are much bigger then.

The chest can award between 2x and 40x multiplier or 7 – 21 free spins during the base game. In the Free Spins mode, players can receive extra Wilds, Wild Reels, additional free spins, and more.

The Golden Treasure Chest is even more lucrative than the ordinary chest. It only lands on the fifth reel and offers five rewards. Once again, your job is to pick the one you like the most.

You can get a 10x – 400x multiplier during the base game, 7 – 21 free spins, Ragnarok Free Spins, and Rage Boost. If you’re lucky enough to land a Golden Treasure Chest during the Free Spins round, you can also win a Wild Reel, extra Wilds, and additional free spins.

The most important feature in the base game is the Rage Meter. You’ll notice that all four Viking characters below the grid have meters above them. The more you land their symbols on the reels, the more their Rage Meter will fill up. Once one of the Viking Rage Meters is full, you’ll get seven free spins, with that Viking entering Berzerk mode. Once the free spins start, that Viking will start fighting against the Siren.

Vikings Go Berzerk have an RTP of 96.1%, which is slightly above the industry average.

Being developed by a reputable provider, the game passed all fairness audits. In other words, the RNG makes it genuinely random and fair, and it can’t be tampered with or rigged in any way.

Vikings Go Berzerk continued Yggdrasil’s tradition of making high-quality slots inspired by Norse mythology. It’s the most popular title from the Vikings slots saga. The game offers a wide range of exciting bonus features, and some of them were quite ground-breaking at the time.