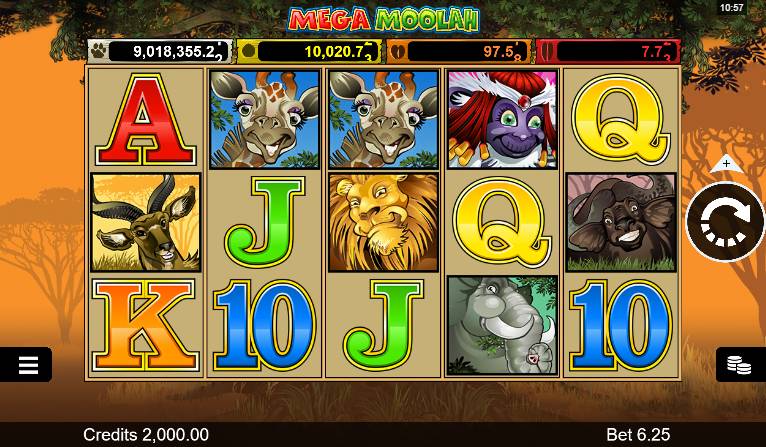 Mega Moolah Slot in a Nutshell:

Mega Moolah by Microgaming has been one of the world’s most popular slot machines ever since it first appeared back in November 2006. It is known by the ‘Million Maker’ moniker thanks to the enormous progressive jackpot pot. Mega Moolah holds the Guinness Record for the biggest jackpot valued at £13.2 million that was paid to a British soldier in 2015. Apart from the big jackpot, players can also enjoy a variety of bonus offers and an appealing theme found in this 5-reel slot.

Nowadays, slots come in all shapes and sizes, with an incredible variety of themes. Mega Moolah is full of cartoonish symbols and characters that represent the animals of the African savanna. The slot can be said to bear some resemblance to the famed Disney’s cartoon “The Lion King,” given how its characters are designed.

You can find a lion with a mesmerizing mane and a monkey-like creature resembling Rafiki with a Massai-like headdress. We point out the monkey-like animal, as the quality of the design does not let you ascertain what that creature is. Given how the visual aspect of the game is undoubtedly sub-par, it is probably so to prevent copyright infringement issues with the Disney company.

Other symbols include elephants, giraffes, zebras, and other animals that belong to the group of high-paying symbols, while the low-paying ones are reserved for the standard card suits ranging from 10 to Ace.

On the other hand, the audio effects are a tad bit better and bring the sounds of the savannah and the great outdoors to the mix. The sounds improve the atmosphere and set the right stage for the game, but don’t expect more than a cacophony of chirps, cawing, and roars.

Mega Moolah is one of the easiest slots to master. It consists of a layout featuring five reels with three rows of symbols and 25 paylines. The number of paylines is fixed. Players initiate the spin by first setting the value of the coin. You can bet between C$0.25 and C$6.25 per spin so that you won’t see a broad betting range, but it is not needed in order to trigger one of the four randomly activated jackpots.

After you have chosen the value of your bet, all you need to do is to hit the spin button. You can even use the Autoplay button and instruct the machine to complete up to 50 automatic spins in your stead. Also, there is a Turbo mode that speeds the spins up for all those who are less patient.

Mega Moolah has Mini, Minor, Major and Mega progressive jackpots, which means all bets made on Mega Moolah in all casinos that offer it contribute to the size of the progressive jackpot pots. The biggest Mega jackpot is frequently valued at millions of dollars. It resets after every win to start at C$1 million, while Major jackpot seeds at C$10,000, followed by Minor and Mini jackpots that seed at C$100 and C$10, respectively.

The best thing about Mega Moolah jackpots is that you don’t need to bet big to trigger them. Although betting max does improve your odds of triggering one of the jackpots, it does not do it to a great extent and is therefore not necessary to win big. Translated into coins, you can win up to 225,000 coins from Mega Jackpot, while the maximum jackpot from the base game can bring up to 75,000 coins, or 15,000x times your bet.

In 2017, a record number of 12 jackpots were recorded, which beats the previous record of 6 jackpots by a double.

Apart from the standard distinction between the low-paying and high-paying standard symbols we described earlier, Mega Moolah also features Wild and Scatter bonus symbols. The Wild symbol is in the form of a lion and substitutes all other symbols except the Scatter that is represented by the monkey symbol which doubles the wins when part of the winning combo.

The Scatter, on the other hand, is a bonus-triggering symbol. Three, four, or five Scatters initiate the Bonus round where 15 free spins are awarded. These free spins can be retriggered with three or more additional Scatters. All wins made during the Bonus round are tripled, and all bets and lines are played at the same value as when the Bonus round was initiated.

The progressive jackpots can only be won through an additional Bonus Game. There, a Jackpot Bonus Wheel of Fortune will spin and, as it spins, you will see different sections of the wheel corresponding to different jackpots. These sections differ in sizes, and the smallest one is reserved for the Mega jackpot. Depending on where the wheel stops, the corresponding jackpot is awarded.

The return-to-player percentage, or RTP, of Mega Moolah, is just 88.12%, which is way lower than the industry average. However, considering the size of the progressive jackpot, they had to cut it to 88.12%. Mega Moolah is marked as a medium variance slot, which means you can still win decent prizes without too many and too frequent dry spells.

Mega Moolah’s biggest appeal is definitely the size of its progressive jackpots. These life-changing sums are the main reason why players opt for it, but the size of the base game’s jackpot and the free spins bonus feature shouldn’t be disregarded. There isn’t much value in the aesthetic segment of the game, but it features a cartoonish theme and symbols quite pleasing to the eye. If you are up for a game with massive payouts that can hit any time and don’t care much about the gamification characteristics and visual aspects of the slot, then Mega Moolah is the right one for you.