Quick verdict: Eastern Emeralds is a standard Quickspin video slot with mesmerizing visuals and quality gameplay. Everything in the game screams fun, but the special features and an above-average RTP of 96.58% bring even more excitement and an adrenaline rush once the multipliers get into play. With an Asian theme and intuitive gameplay, Eastern Emeralds is bound to be appealing to many, and you only need to give it a chance to experience it all.

Eastern Emeralds is an Asian-themed slot inspired by ancient Asian civilizations and symbols. Everything the West knows about ancient China is here, including stunning nature, beautiful oriental buildings, and attractive symbols of dragons, koi fish, turtles, birds, and more.

Outside of the theme, there’s not much of a story, as Eastern Emeralds slot chooses to focus more on the gameplay elements, which we’ll cover extensively in this review.

Eastern Emeralds slot has been developed by Quickspin, a popular video slot provider known for releasing only high-quality slots. The name brings stunning visuals to mind for many players, and, once you start playing Eastern Emeralds you won’t be disappointed.

You can see the clear quality in the graphics, animations, and numerous smaller details present in the game. From the spins to the big win animations, everything is designed to appeal to the eyes, which will allow the game to stay fresh for many years to come.

Both the grid and the background are designed in detail, and you’ll love how elegantly the reels spin, even with the Quick Spin feature turned on.

Most of the designers’ attention was clearly given to the symbols themselves, as even the lowest-paying symbols look amazing. The more they pay, the more they stand out, with stunning visuals and details that make them look bigger. Even without looking at the paytable, you’ll know exactly which symbols to hope for in Eastern Emeralds.

Moving on to the sound, a soothing Eastern melody is the backdrop of the game, but every action in the game will yield its own sound effect that will keep the excitement going. The quality of these sounds will undoubtedly get you to pause your playlist and let the game entertain you aurally as much as it does visually. 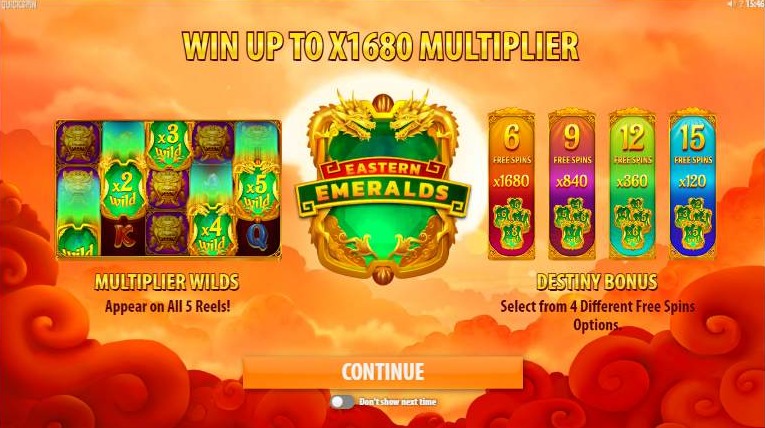 All the options you need in a slot are neatly arranged on the main screen, right beneath the standard 5×3 grid. Starting from the left, you’ll find the ‘Settings’ and the ‘Paytable’ buttons, and right next to them is where you’ll see your balance, bet lines, and the total bet that’s fully adjustable. You can bet from 0.2 to 100 credits, but you won’t be able to change the number of paylines, as they are fixed.

By clicking on the ‘Settings’ button, you’ll get to choose to use the space button for the spin on the desktop, whereas on the phone, you can click anywhere on the screen to spin the reels.

The game is designed to function well on both your computer and your phone. Even though it looks quite good, it’s not demanding, so you don’t need to have a strong machine to run it.

Eastern Emeralds doesn’t feature a standard Wild symbol. However, it does have a Multiplier Wild symbol that’s easy to recognize, as it has the word “wild” written on it, together with the multiplier number. As in all games, it substitutes all symbols, except the Scatter. However, besides substituting most symbols, the Wilds also multiply your winnings based on the multiplier number.

The Bonus Scatter symbol is a stunning red bird, and you need to get three of them to start the Destiny Bonus game. The Scatters appear randomly anywhere on reels 2, 3, and 4. Once the bonus game starts, you get to choose a different number of free spins and multipliers. You’ll notice four options:

As if that weren’t enough, the Wilds can appear in the Destiny Bonus game as well, together with their multipliers that will be applied to your chosen multiplier. With this option, your winnings can reach breathtaking heights.

Eastern Emeralds slot has risky features, making the game quite volatile. Still, it has a tremendous above-average RTP percentage, sitting at 96.58%. This guarantees frequent wins, but the inherent volatility of the bonus game can bring some genuinely massive wins that will make any RTP percentage practically meaningless.

In summation, Eastern Emeralds doesn’t differ much from many other Quickspin games, but it certainly brings enough benefits to warrant a bit of testing from your end.

The visuals and the sounds are superb, the gameplay function is easy and intuitive, and you get an incredibly rewarding Free Spin feature. Add the Multiplier Wilds to that, and you’ve got yourself a slot that has the potential to reward you with thousands of credits.