Book of 99 is one of the latest releases by Relax Gaming, featuring 5 reels with 3 rows of symbols that form winning combos on a playing grid composed of 10 paylines. The slot has a massive 99% RTP, which few others can match.

Book of 99 is not like most other “Book of” slots. It does not draw inspiration for its theme from Egyptian but rather from Greek mythology, with monsters such as cyclops, lamiae, and the heroes that banish them as its main symbols.

Book of 99 is based on ancient Greek mythology and the exploits of brave heroes. The Greek Ionic pillars make up the structure of the grid, with the sea, mountains, and trees set in the backdrop. Relax Gaming did a good job crafting the game’s visuals. They are a mixture of cartoonish graphics and simple animations that signal winning combinations.

The base game symbols are divided into higher- and lower-paying ones. The high-paying symbols are heroes and monsters we hear about in stories of Hercules and his feats, while the lower-paying ones are classic cards from 10 to Ace. Of course, the game wouldn’t be called Book of 99 if it weren’t for the Book, which functions as a wild symbol and triggers the bonus round, but more on that in subsequent paragraphs.

Another reason Book of 99 bears such a name is the 99% RTP that it features. This theoretical return is as high as it gets, especially for a high variance slot. Its hit frequency is 29.83%, which roughly translates to a hit once every three or four rounds.

The maximum win is 5,000x the stake, courtesy of the free spins rounds and the expanding symbols feature.

For a winning combination, at least three identical symbols must appear consecutively, starting with the leftmost reel. The wild symbol appears across the grid and substitutes all others except the expanding symbols in the free spins round.

When it comes to the betting range, it’s pretty flexible. The minimum bet is $0.10, while the maximum bet you can place is set at $100, catering to the needs of both casual players and high rollers.

Getting the reels of Book of 99 to spin takes only a couple of clicks or taps. After the game has loaded, you simply need to set the value of your bet. You can do so by clicking on the plus and minus signs next to the indicated wager. 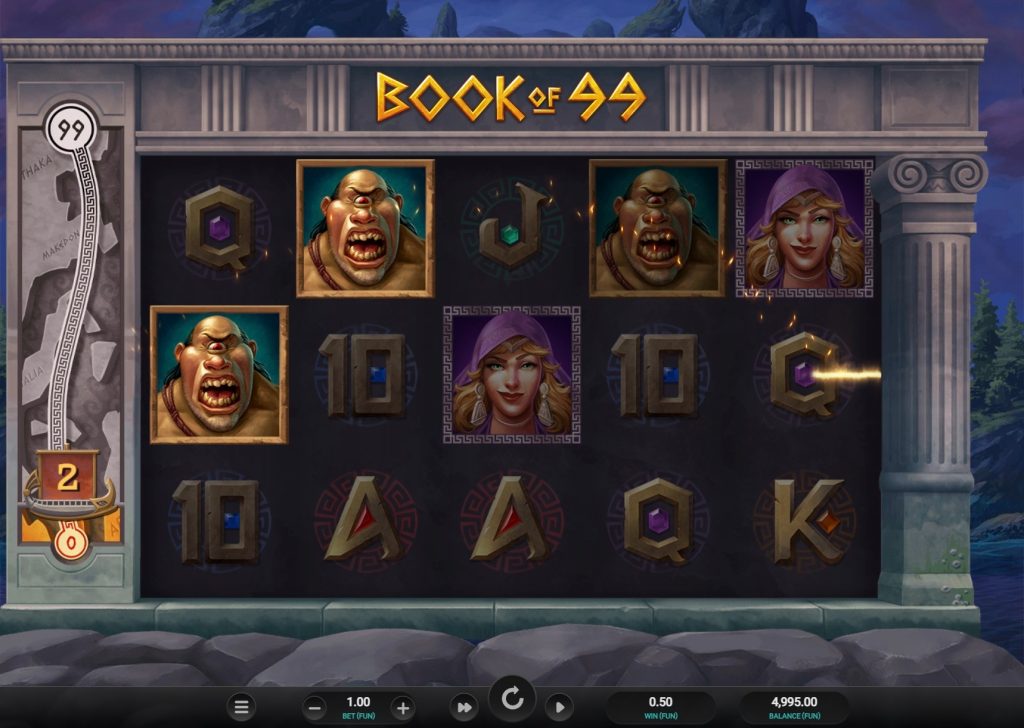 You can use the Speed mode if you want the reels to spin faster. There’s also the Autoplay feature, where you can set the number of spins you want the machine to complete for you. The number can be virtually unlimited. However, make sure not to burn through your bankroll too quickly.

Book of 99 has only one bonus feature — the free spins game, which awards ten spins. There are two ways in which you can trigger the bonus feature. One of them is by landing three or more wild symbols on the grid.

A special expanding symbol will appear in the free spins, randomly selected from the nine regular ones. Then, after the standard wins are paid, if the special character comes from the group of high-paying ones and there are at least two of them, they will expand to cover the entire reels they are on. If the special symbol comes from the ranks of lower-paying characters, you’ll need three to trigger the expansion.

The best thing about the expanding symbol is that it will pay on each line, even if the symbols are not connected from left to right. The appearance of three or more wilds during the free spins will give you additional ten spins.

The other way of triggering the free spins is through Collection. For every wild symbol that lands during the base game, the collection metre will increase by 1. Once the metre reaches 99, the free spins will be triggered.

It’s important to note that the value of free spins triggered via three wilds landing on the reels in a winning combo will be the same as with the spin that triggered it. The free spins that come from filling the bonus metre make the situation a bit unusual.

Namely, the bet size will correspond to the average bet size set when collecting each of the wilds. For those players well-versed in maths, it’s enough to say that the bet size will be the integer multiple of the minimum bet. Stochastic rounding will be used if the number is not an integer (whole number).

Relax Gaming developed Book of 99 using the latest HTML5 technology to make it compatible with all types of mobile devices, regardless of their operating system. You do not need to download an app for your smartphone or tablet to access the game. You can open and play Book of 99 via any mobile web browser

Besides being optimized for all screen sizes, the game is accessible in both landscape and portrait modes.

Book of 99 has redefined the “Book of” genre. It steered clear from the Egyptian theme prevalent in most slots with books as their leitmotif. Also, the game boasts a remarkable 99% RTP which is as high as it can get. The 5,000x max payout might not offer life-changing wins, but it appeals to a large audience. The key to the biggest wins in Book of 99 lies in the expanding symbol in the free spins round.

If you are looking for a high volatility slot with a fantastic free spins bonus feature and superb payout opportunities, look no further than Book of 99.