Canadians, in particular, are huge Sailor Moon fans. The Toronto Sailor Moon Celebration 2017 that was held on June 24 was a big success. In order to meet a worldwide hunger for the dynamic shōjo manga character’s exploits, Play’n Go released a Japanese manga-inspired grid slot game called Moon Princess in July. It’s no run of the mill spinning reels game. Moon Princess would seem to be inspired by the 25th anniversary of the Sailor Moon animated series. The game features animated characters performing magic on the 5×5 grid from the side of the play area. Look for the Princess trio of Love, Star, and Storm to help you match 3 or more symbols horizontally or vertically for a win. 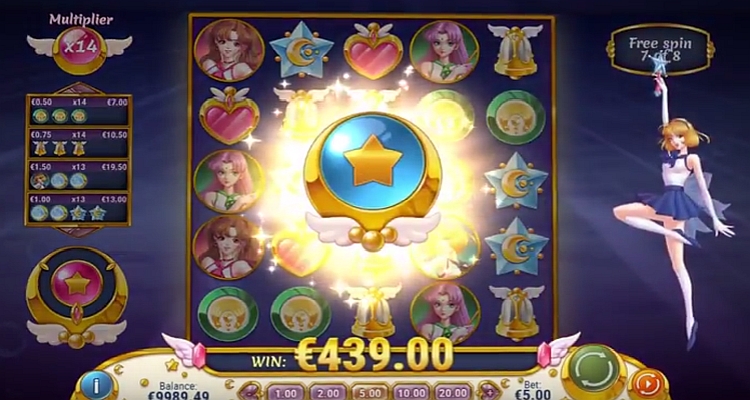 Winning symbols disappear, but rather than be replaced with new symbols, the remaining icons simply settle closer to the base creating new combinations. The pay multiplier increases each time symbols drop and a Wild Moon can replace the central symbol in a winning combination to make the next match-up easier.

As winning spins accumulate, players will find fewer and fewer symbols remaining in the grid. When all 25 are gone free spins are offered. Players can choose low to high volatility at this point depending on which Princess they choose. Love gives 4 free spins with an extra 4 awarded if the bonus meter gets filled. Star gives 5 free spins plus 3 extra for the meter and choosing Storm awards 8 free spins with a bonus of 2 more if the bonus meter is filled. Prizes multiply with each win up to 20x. 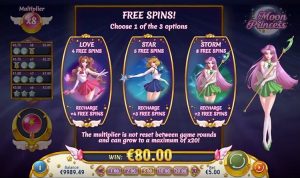 Clear the grid again during free spins to win 100x your total bet and re-trigger the free spins sequence.

During the base game, one of the Princesses can magically appear after a non-winning spin to alter the grid and make it a winning spin after all. Each Princess has her own power. Star adds wilds, Love transforms symbols, and Storm zaps symbols away.

There’s a lot going on off the grid too. Winning combinations help charge up the Princess Trinity meter – when it’s fully charged look out for a special re-spin with all three Princesses combining powers to create even bigger prizes.

Online players from Canada can find the game at Casumo Casino along with sign up bonuses worth $1,200 and 200 free spins if they take all five deposit bonuses starting at 200%. To see a list of more Canadian Casinos that offer Play’n Go games click here.