Quick verdict: Mamma Mia is a unique slot game from Betsoft with a lot of special features every player will love. It uses a standard 5×3 grid with 30 paylines, but you get to change the bet in any way you want. The star of the show is the Locking Wilds feature, but you certainly won’t be disappointed with numerous other bonus features the game has tucked away, waiting for players to discover them.

Mamma Mia slot is not a game that focuses on a story, but, to be fair, it doesn’t even need one. Frankly, the entire slot’s background, both literal and metaphorical, which is connected to Italian cuisine and master-chefs, is more than enough.

The game is all about one of the best cuisines in the world — in fact, the design of the slot’s main screen has been made to resemble a kitchen.

Naturally, the game’s overall feel is incredibly positive. After all, what’s not to like about food? So, get ready to feel hungry for both winnings and Italian food once you start playing this excellent slot game.

Mamma Mia slot has been made to look like an animated cartoon, with Ratatouille or any other popular animated movie vibes. As we’ve said, the background is a kitchen, and a well-designed one, for that matter. You’ll notice that a lot of attention has been paid to details, like a wooden frame enveloping the grid, for example.

There’s a large Italian chef in the corner — and yes, he does wear the white hat, and he does have a mustache. This well-designed chef acts as the game’s highest-paying symbol as well.

The other symbols are all animated, and they represent various items and people connected to a typical restaurant. That’s why we have a food critic, a menu, an exquisite-looking dish, newspapers, utensils, and more. All of these symbols are clickable, but that’s a feature we’ll explain later.

As for the sound, we love how they’ve made the clanking of a typical busy restaurant kitchen the undertone for the reels spinning. What’s more, every time you win, you’ll hear a cheerful Italian jingle in the background. Many people turn off the sound in slots, but we advise you to keep it on for this one, as you won’t be disappointed. 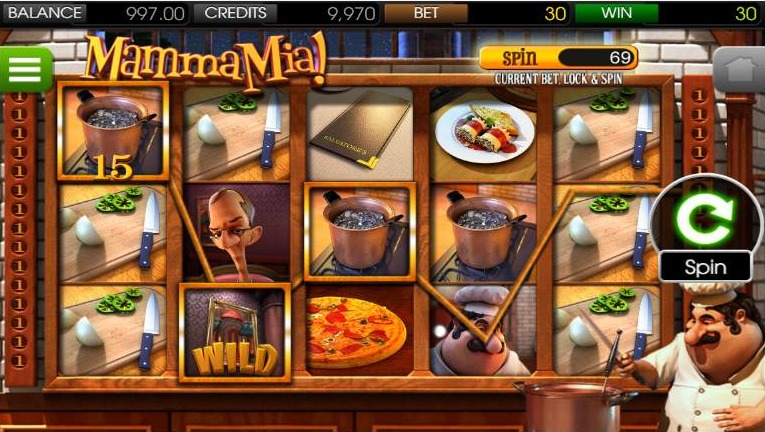 The game is very minimalistic when it comes to regular gameplay options. On the main screen, you only have the ‘Spin’ button, as well as a special spin button for a feature called Locking Wilds, an excellent and unique characteristic of Mamma Mia you’ll love to use.

With the Locking Wilds feature, you get to lock any number of Wild symbols anywhere on the screen — you only need to click on the symbols you want to turn into Wilds. Once that’s done, you can click on the ‘Locking Wilds Spin’ button, which also displays your new total bet amount, and spin the grid with the Wilds in place. They will replace all symbols, and, as a result, the game will give you higher rewards. As you can expect, this is very risky, as the bets are much higher. Still, the potential wins are also quite lucrative.

Mamma Mia has an Autoplay function, but this option, just like many others, can be found in the Settings. The main screen is made for gaming only, which is a peculiar choice, as most slots tend to put the ‘Autoplay’ and ‘Bet Size’ buttons on the main screen as well. However, it’s not a bad choice, as you’ll mostly be using the ‘Spin’ and ‘Locking Wilds Spin’ buttons.

As for the bet amount, you’ll have a lot of leeway in terms of choosing the amount you want to bet. The game lets you select the coin denomination, bet per line, and the number of lines. That way, your bet can be as low as a single credit and as high as 150 credits, with countless options in between.

The Autoplay feature is equally detailed. Within it, you’ll also find the Quick Spin feature, one that many players love to turn on in most slots, which is why it’s good that the game has it.

As previously stated, Mamma Mia slot has a special Locking Wilds feature that lets you change any symbol into a Wild. Still, your total bet amount will change accordingly, so expect to pay a hefty fee for locking a lot of Wilds. The good thing is that Wilds appear on their own as well, and they always substitute all other icons, no matter which method they’ve appeared through.

The only symbol the Wild cannot substitute is the Free Spins symbol in the shape of a delicious Italian pizza. Three or more pizzas will activate the Free Spins feature, where you’ll use the last paid spin bet as the free spins bet. The Wilds don’t appear in this bonus game, but the mode has unique symbols (all in the shape of specific ingredients) that pay a lot more than the usual symbols.

The Free Spins feature might sound like the only bonus game in Mamma Mia, but that’s far from the truth. There’s also the Critic Bonus Round, activated once you get three or more special menu symbols. The bonus game is very enjoyable, as you get to help the chef create a perfect dish. In the end, you’ll be scored for your choices accordingly.

However, that’s not all. Mamma Mia slot also features the Food Cover symbols that act similarly to the Free Spins symbols. If three or more appear on the grid, you get to use the Food Cover Click Me feature. In essence, you get to choose a single clickable cover that will award you with hidden prizes. It’s a nice bonus feature, but we won’t spoil it for you by discussing it further.

With such an abundance of features, it’s not surprising that the RTP percentage of Mamma Mia slot is barely an average one, sitting at 95%. Some players won’t like this fact, but thanks to all the bonus features, free spins, and special gameplay options, you’ll be rewarded more than enough, even with such a simple RTP.

All in all, the Mamma Mia slot is a stunning yet simple-looking game with a lot of features hidden underneath, waiting for you to discover them. The RTP is average, but the visuals and sound effects are exquisite, and the high number of different special features and bonus games are, without a doubt, the main attractions. It’s truly a unique slot in a sea of standard video slot games, one you definitely need to try.