Quick verdict: Book of Tut is a fairly popular video slot from Pragmatic Play that can be found on a majority of top online casino sites. The game features ten paylines and is played across five reels and three rows. The gameplay is lightning-fast, allowing you to use quick and turbo spins, as well as up to 100 automatic spins. Although it does have an Egyptian theme, Book of Tut’s graphics and sound effects have a very arcadey feel to them. The game has an estimated RTP of 96.5%.

The Story Behind Book of Tut

Book of Tut came out in May of 2020. The full title of the game is John Hunter and the Book of Tut, and it’s obvious that the developers’ inspiration came from the popular Play’n Go title Rich Wilde and the Book of Dead that was released in 2016.

While Book of Tut is not exactly a carbon copy of Book of Dead, the two games share a lot of similarities, especially in terms of the game’s theme. There isn’t much of a story going on, but it’s clear that the game’s main character (John Hunter) is on some kind of an exploration mission in Egypt.

The playfield is decorated by golden Egyptian pillars with the backdrop of the Nile river and the pyramids of Giza. The symbols include a scarab, Tutankhamun, a golden statue of Bastet, and a portrait of John Hunter. The Book of Tut itself serves as both the wild and scatter, while the low-tier symbols are represented by properly decorated playing card marks.

Book of Tut is a game that came out in 2020, so you can expect high-quality graphics and smooth gameplay. The reels spin quickly and can even be accelerated with the use of the turbo spin feature (holding the space button). 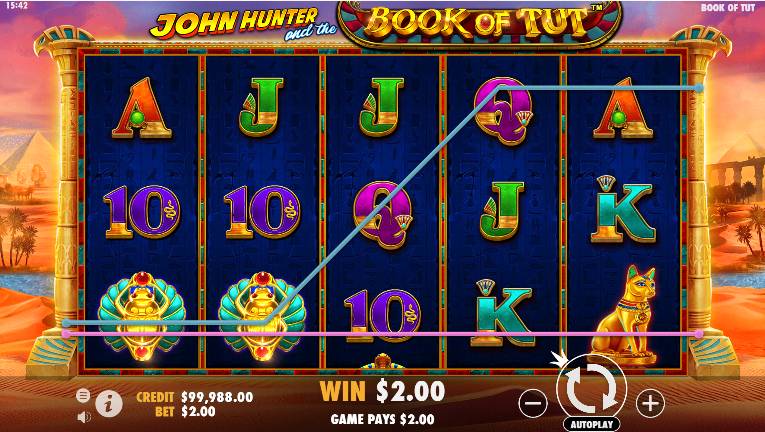 The background artwork is gorgeous, showing the Giza Plateau at the peak of its existence. The scene looks very much alive as there are even some moving elements, like the flowing Nile river and the clouds above the pyramids. The reels themselves are decorated as well, showing beautiful Egyptian hieroglyphs behind each reel. It honestly looks like the developers paid great attention to detail and created a very scenic playfield.

Calming Egyptian-style music plays in the background the entire time, while the arcade machine sound effects accompany the player as the reels are spun. A catchy and rhythmic soundtrack with sounds of clicking coins is played every time you land a winning spin.

Book of Tut has a familiar 5×3 layout that features ten paylines that pay from left to right. Only the highest win is paid per line, while the wins on multiple lines are added together. At least three low-tier symbols and at least two high-tier symbols must appear on a payline to form a winning combination.

As for the variance, Book of Tut falls into the category of high-variance slots, meaning that the wins are less frequent than usual, but can be extremely rewarding when they occur. The maximum win is worth 5,000x your stake, while the coin value varies between 0.01 and 1, with the ability to set between one and ten coins per line. That means that the total bet can be between 0.01 and 100, catering to both low-level players and high-rollers alike.

While the turbo spin feature accelerates the already quick gameplay, you can also play handsfree using the autoplay option. You can turn on between 10 and 100 automatic spins. At the same time, you can set other parameters for when you want to autoplay to stop, like pausing the feature on a winning spin, stopping it if the bonus is won, stopping if a single win exceeds a certain amount, and more.

All of this is familiar to more experienced video slot players, but even beginners will get the hang of the gameplay pretty quickly.

Unsurprisingly, the most rewarding symbol in the game is the Book of Tut. It serves as both the wild (replacing all other symbols in a combination) and the scatter (unlocking the bonus round).

Book of Tut also acts as its own symbol, paying the player 200x their stake if five books appear on one of the paylines.

When at least three scatters land in a single spin, ten free spins are awarded. Before the bonus round begins, a random symbol will be selected to represent the feature’s expanding wild. After a winning combination is paid, that symbol will expand to cover the entire reel on which it is placed, creating an opportunity for some massive wins.

Landing three or more scatters during the free spins round will trigger yet another ten free spins. There is no limit on how many free spins you can re-trigger.

Book of Tut has an RTP of 96.5%, which is slightly above the industry average. For those of you who are not familiar with the term, RTP stands for Return to Player, and it indicates how much of the wagered money a player can expect in return. So, an RTP of 96.5% means that you will likely get C$96.5 back for every C$100 wagered.

As we mentioned before, Book of Tut has high variance, meaning that the wins are few and far between, but can be very rewarding.

The game is legit as it can be, so you shouldn’t worry about being cheated. Pragmatic Play holds a high reputation in the iGaming industry, and all of the company’s games have been RNG-tested before release.

Book of Tut might be a slight rip-off of Book of Dead, but it is still a very popular title that is enjoyed by thousands of players daily. The game is very simple and accommodates beginner players, although experienced slot fans might find it exciting as well. A simple yet potentially rewarding bonus round is easy to unlock, giving you an opportunity to create some awesome combos.