LeoVegas Casino is a distribution partner of UK game developer, Pragmatic Play, and new games are available to Canadian players with the Wednesday launch of Panda’s Fortune which followed Santa. With only about two weeks to go until Christmas, it’s nice to have a mix of holiday slots and other new games to play. 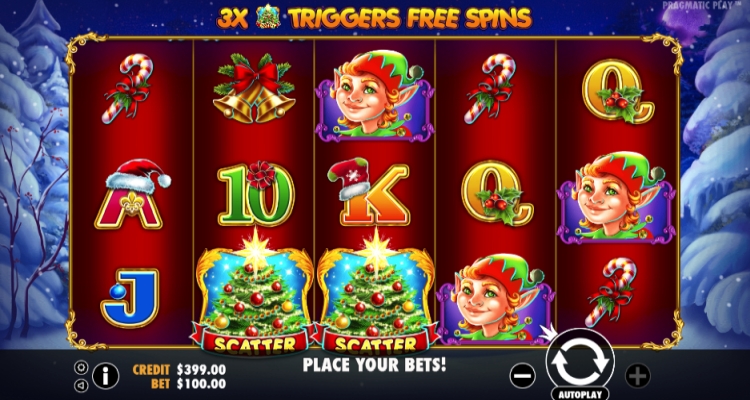 Santa is a vibrant and colorful game with 5 reels and a respectable RTP of 95.92%. The volatility is medium so it’s not too risky, but big wins will be traded for nice medium value prizes like those in the picking game. Played against a red backdrop, reindeer, elves, bells, and other symbols heighten the holiday mood with scattered Christmas trees, wild Santa’s and gold boxes with red ribbons and bows which trigger the bonus game. There are also four jackpots available: Grand, Major, Minor, and Mini.

The soundtrack is pure Christmas.

Scatters reside on reels 2, 3, and 4 and landing three of them will trigger an award of 6 free games. During the free spins, any or all of the last four reels can become totally wild. The bonus game is also available during the free spins round.

Landing a bonus symbol on each reel 1, 3, and 5 will open the jackpot game. You’ll see 12 presents and can pick until you find a jackpot symbol. All revealed prizes plus the fixed jackpot amount will be awarded. The top jackpot is set at 250x total stake and the lowest is 10x total bet.

LeoVegas has a lot of other holiday slots too, like the new Jolly Holly Penguins from Microgaming.

Panda’s Fortune is another new game by Pragmatic Play. A 3×5 video slot with colorful bamboo forest imagery and an oriental soundtrack, the game features golden renditions of every symbol on the 5th reel. These symbols can unlock the games grand, major, or minor jackpots awarding up to 800x total stake.

Pragmatic Play Head of Games Production, Catalin Bratosin, said: “We are proud to launch Panda’s Fortune, a game that is both visually charming and expertly-modelled, with intuitive mechanics offering a truly unique gameplay experience.

“Releasing two new games a month throughout the year is one of our key commitments, and this speed to market without any sacrifices in quality is a significant string to our bow.”