While it won’t affect players at casinos like Mr Green, who recently announced they had added games from a prolific bingo network, all indications are that industry powerhouse GVC has acquired Isle of Man’s Cozy Games. 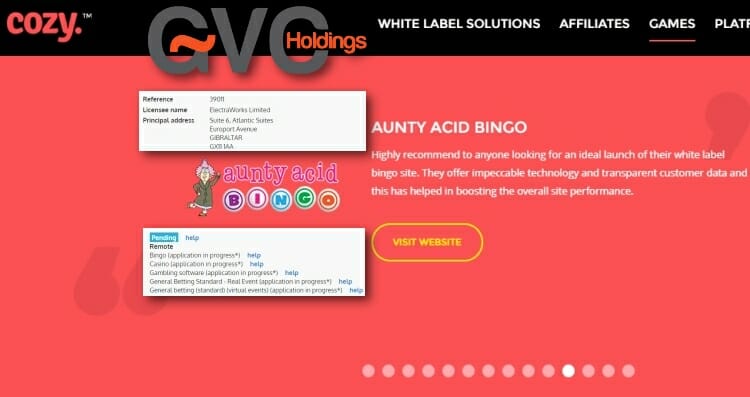 Major mergers and acquisitions are usually announced before the ink dries, but in this case, a bingo affiliate happened to notice that all of the Cozy network sites from 001bingo to scrummybingo dot com now appear under license by ElectraWorks Limited. EWL came into the GVC family with their acquisition of Bwin.party which was completed on Feb.1 2016. This, after a protracted fight among many that eventually boiled down to a head to head battle between 888 and GVC that lasted about four months. GVC paid about C$2 billion to seal the deal.

Interestingly enough, ElectraWorks Limited is the operator of record only in the UK, with Cozy Games Management Limited still listed as the operator for the rest of the world via their IOM license. This may indicate a complete merger or acquisition rather than a simple selling off of domains. However, since there has been no formal announcement from either company it could also simply boil down to a licensing agreement and we won’t speculate on the reasons for such a move if that’s the case.

Canadian players may not find Cozy games on Mr Green Bingo, part of the larger casino and sports betting site quite yet. When they announced the launch of 75, 80, and 90 ball bingo along with a unique keno offering on October 30, the company mentioned that the products would be rolled out first in the UK and Sweden, eventually coming to other markets such as Canada. We logged in to see if they were available yet, but no keno or bingo offerings were to be found.

When Mr Green announced the game additions, CEO, Jesper Kärrbrink said, “Through number games, we can reach a whole new audience and we look forward to following the interest of ‘One-minute Keno’ as well as the bingo product in the UK and other markets.”

With over 100 bingo halls across the country, as well as our penchant for the lottery, Mr Green and other Cozy providers would do well to launch here soon. Some reports indicate that bingo generates over $2 billion a year in revenues and most of the popular online casinos here don’t offer the games. In order to stay ahead of PlayNow’s current offering and PlayOLG’s planned bingo additions, offshore providers would do well to look at the possibilities.

While they may be testing number games in other markets before launching here, Mr Green does release new games from Betsoft, IGT, Leander, Microgaming, NYX, Play’n Go, Yggdrasil, and many others into the Canadian marketplace as soon as any other operator and before most others do.

While the Cozy Game domains were not listed under the UKGC site under ElectraWorks Limited as recently as September 30 (our last archived copy) and were found about 2 weeks ago – there have been no public announcements and nothing appears in the GVC PLC news nor interim report filed September 14, 2017. Our archived copy of the EWL license on the UKGC website does show an application in progress for bingo, casino, gambling software, and general betting for live and virtual events while the company still had and has active licenses in all five categories.