Old Skool Studios of Vancouver, Canada has had their third game added to Microgaming’s Quickfire multi-developer platform. Jewel Quest Riches is a branded slot title that allows players to gamble for real money. It is based on the iWin casual game, Jewel Quest. The game is expected to appeal to customers who enjoy casual puzzle games that reward strategy with mystery, progression, achievements and real prizes. 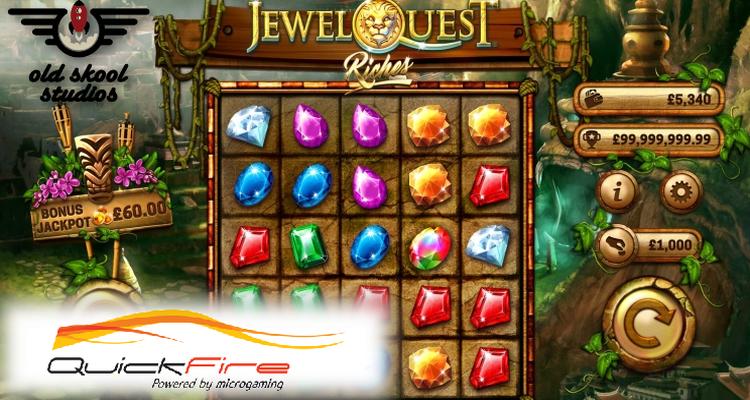 The Executive Producer at Old Skool Studios, Mike McGraw told the press: “Jewel Quest Riches is our third game released on Quickfire and our first branded title. This casual game represents many months of planning, design, and development, and we couldn’t be more pleased with the iWin partnership. We aimed to really honor the classic Jewel Quest casual franchise and we’re very pleased to see such an incredible response from the players.”

The game, which is available in 26 languages, went live on the Microgaming platform in August – first at Casumo on August 2, and then became available to the wider network which includes Canadian casinos like LeoVegas and Mr Green on August 27.

Quickfire Games Manager, Andrew Hollis said in a press release yesterday: “It’s great to be working with Old Skool Studios and to be able to offer the fantastic Jewel Quest to our Quickfire operators, exclusively. Since its launch last month, Jewel Quest has performed very well for the operators that have taken it live. We are always looking for new, exciting and innovative content to integrate on to Quickfire and Jewel Quest ticks all three boxes.”

LeoVegas said of the game: “Our best casual game to date.”

Three Lion symbols will trigger the Jewel Quest Bonus, Choosing one of the icons will award a number of free moves. The player is then transported to one of 8 mythical bonus worlds with names like Legends of Ages, Riches of El Dorado, and Fate of Atlantis. Each bonus world offers different puzzles wherein players try to match-3. Solving puzzles, using strategy, and counting on luck all factor into winning the game. Completing levels can award bonus jackpot wins.

iWin CEO, C.J. Wolf said of the game’s deployment: “Jewel Quest has been accessible on many platforms but this is the first iteration of the game as a real money slot game and iWin couldn’t be more pleased with the implementation of this. This game highlights all of the amazing features that made Jewel Quest a worldwide phenomenon. Jewel Quest fans will most certainly be delighted and entertained by this game!”

Quickfire makes it possible for casinos to offer a variety of games, not only from the Microgaming library but from rising stars and independent labs like Old Skool Studios.

Old Skool has designed and developed games since 2010 through LM Design Werks. In addition to Microgaming powered casinos, some of their clients include Rocket Gaming, GameHouse, Neowiz, EA, Zynga, BC Lottery and Casino Cruise-IGS.