In about two weeks Canadian casinos will see the debut of another phenomenal slot by Stockholm-based and Malta-licensed Quickspin. Their last three games have been great, just as we expected. Mighty Arthur, Rapunzel’s Tower, and Pied Piper highlight the fantasy aspect of gaming the artists are becoming well known for. On February 13, 2018, they will release Northern Sky at casinos such as Dunder, Thrills, GUTS, Casinoland, and Casumo. Please read on for a preview. 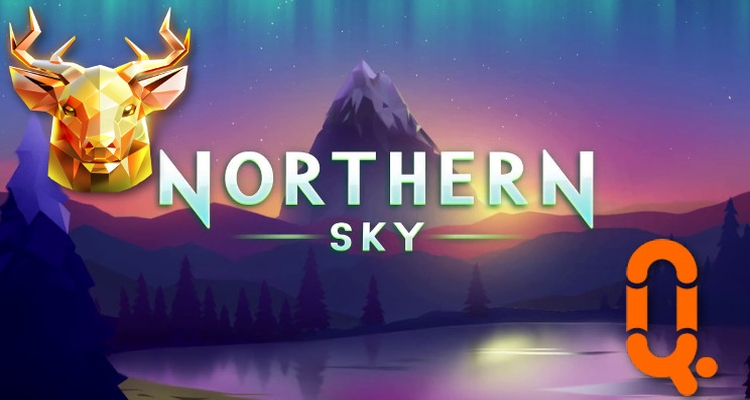 The reel symbols depict beasts of the north like deer, bears, foxes, and owls. They aren’t represented as cartoon drawings, rather they appear to be well-faceted jewels with chiseled features and mystical powers. Winning symbols positively glow while non-participated icons become duller and recede into the shadows.

Set against the starry northern sky with mountain peaks as a backdrop, the 3×5 reel set is transparent giving a full view of the game environment. There are 9 pay lines and every winning spin creates a respin. When 3 bonus symbols land all of the lower paying icons are removed from the reels so only high paying animal symbols are left for the free spins.

During base game play, whenever a winning combination is achieved those symbols will stay in place on the reels while the non-winning symbols are take away then replaced with new symbols. When a new win is recorded the new winning symbols will also stay in place for the next respin. The game will continue to spin again and again as long as new winning combinations appear. Ten free games are awarded whenever three bonus mountain symbols appear on the same spin.

With only nine pay lines we expect the top prize to be substantial. The jackpot in this game is 3,000x total stake making it a game many players will return to again and again. Look for this and other exciting Quickspin games at Casumo Casino.

Will The End of Summer Mean Fewer New Slots for Canadians?
4 years ago
Views:1784 Comments: 0

Playtech Release Age of the Gods - King of the Underworld
4 years ago
Views:1853 Comments: 0