Canadian and Antiguan entrepreneur, Calvin Ayre has been appointed to a government position in his new home country of Antigua and Barbuda. The Lloydminster, Saskatchewan born Ayre is most well known for creating Bodog, a venture that eventually earned him notoriety as a billionaire online mover and shaker, and eventually saw him wanted by the US government on illegal gambling and other charges. 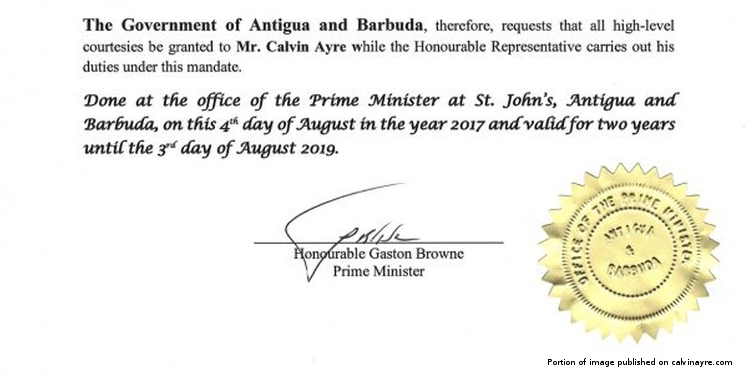 His appointment comes less than a month after it was announced that the US had dropped federal felony charges against him for allegedly operating an illegal gambling business and laundering money between June 2006 and January 2012. Ayre has maintained his innocence since the 2012 indictment but reportedly admitted to lesser misdemeanor charges of being an “accessory after the fact” via telephone from Vancouver early last month in exchange for all charges against him and his company being dropped.

Although that was big news for the Bodog founder, the Calvin Ayre name made a much bigger splash in the media in March when Reuters ran an article that seemed to pair the then fugitive with purported Bitcoin creator, Craig Wright. Wright had claimed earlier that he was the person behind “Satoshi Nakamoto”, the person most credited with creating the technology behind the cryptocurrency.

That news and other reports related to it become more important when looking at a reported statement from the so far unnamed Director-General of Communications for the government of Antigua and Barbuda. According to several media reports, “Mr. Ayre will advise the Government on the effective implementation of new technological developments in cryptocurrency and Bitcoin which have been adopted by leading companies in the United States, Australia, Denmark, the Netherlands, Sweden, Canada, China, and the United Kingdom.”

The March article by Reuters reports that Ayre began construction of a $25 million call center last October in Antigua which the news outlet says is part of his vision for Bitcoin and online gaming. An Ayre spokesman reportedly provided Reuters with notes that included Ayre stating: “I see a growing convergence of Bitcoin, online gaming, virtual reality and gamification technologies, and progressive countries like Antigua are poised to take advantage of this convergence by developing a truly global services industry.”

The article went on to claim that Wright (Satoshi Nakamoto) planned to propose that the Antiguan government adopt Bitcoin as its official currency.

A report on Calvinayre.com yesterday states: “[Calvin Ayre] has already invested heavily in Bitcoin blockchain core technology and his e-Com technology processes more Bitcoin transactions than any other platform in the world today.”

The government of Antigua and Barbuda has reportedly suffered economically since the US government began cracking down on internet gambling activities. The calvinayre.com article went on to say that “[Ayre’s] efforts are expected to re-invigorate the Internet Gaming industry in Antigua and Barbuda which, in 1999, provided more than US$100 million to the economy and employed over 2,000 people. Today, the online gaming business is worth in excess of US$37.9 billion annually with markets throughout Asia and Europe.”

This article has been updated to correct the spelling of Calvin Ayre’s name.

Mayor Says All OLG Jobs Should be in Sault Ste. Marie
1 day ago
Views:86 Comments: 0
wpDiscuz